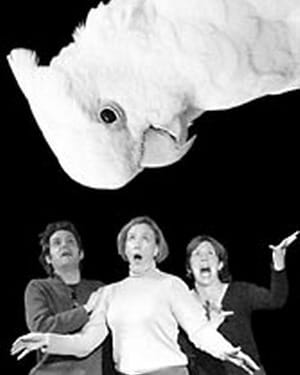 I must tell you at the outset that this play features an enormous Cockatoo. When I say “enormous” I don’t mean big like the bird that Robert Blake, pre-indictment, carried on his shoulder in Berretta. I mean bigger than Totie Fields, bigger than Flipper the Dolphin, bigger than God. Monkeyboy is a meta-bird with a rolling basso profundo voice and a taste for Fox News and Facts of Life, put here on earth to torment his hapless owner, Veronica (a superb Rachel Bridges.)

Certain large birds can imitate sounds at random, sometimes with unnerving precision. It has been a literary conceit, stretching back to Aristophanes, that by making human sounds birds can somehow impart human meaning. Poe’s raven had only one devastating word but for Monkeyboy – named for what he says, not what he is – the language has no limits. Awash in our current cultural debris, Monkeyboy has become ideally suited for a society of obsessive consumers. (“I require a glass of milk and a Ho Ho,” he instructs us at one point.) Plus – more Monkey’s Paw than Monkeyboy – he brings bad luck to whoever owns him. Driven nearly to madness by this avian Moby Dick, Veronica plots with her best friend (Hope Lambert) and the bird’s former owner (Ray Ficca) to bring about peace while – as they constantly, if reluctantly, observe – respecting all life.

Co-playwrights Keith Bridges, Chris Stezin and Richard Washer and a gifted cast harvest every conceivable laugh out this rather slender premise, as improbable developments are followed by ridiculous ones until the play concludes in a deus ex machina which is both improbable and ridiculous. It doesn’t matter. I didn’t expect to see The Cherry Orchard here, and neither should you. Monkeyboy – the play, not the Cockatoo – was put here on earth to make us giggle and snort, and I laughed till my sides ached.

Having said that, I should also note that there were moments in the second Act where things seemed a little stale. A couple of jokes got recycled, and not to advantage. The characters made a few half-hearted stabs at romance, which sort of hung in the air for a few moments and died.

Jim Helein, who plays the title bird, is the only non-Equity actor in the cast, but he more than holds his own. He has captured a Cockatoo’s preternaturally alert persona and seemingly regal quality, and his mellow singing voice – Monkeyboy is particularly partial to Negro Spirituals (“Can we say that?” asks Veronica’s hyperanxious friend, Ginger, who then decides “Gospel music!”) – combine to create a creature who truly seems to be half-bird, half-human. Helein also played three peripheral characters, imbuing each one with a different nonsensical personality.

Helein is a big man, but he moves with surprising ease and facility in the dream ballet which opens the Second Act. This hilarious sequence, which is almost worth the price of admission in and of itself, features the acrobatic moves of Ficca, a wonderfully graceful actor who uses physical comedy to establish his character with efficiency and dispatch.

Lambert also gave a strong performance, but the production – most probably the writers – decided to stuff her character with such overwhelming anxiety that she did not become as fully realized as the others.

Charter Theatre specializes in the development of new playwrights, and thus earns the gratitude of anyone who cares about the posterity of theater in Washington. Its next show, Wonders Never Cease, begins on May 11.

(Charter Theatre at the National Conservatory of Dramatic Arts, 1556 Wisconsin Ave. NW, inside the Georgetown Lutheran Church at Wisconsin and Volta Place, Thursdays through Sundays at 7.30 and Saturday matinees at 3.00, through January 29.)