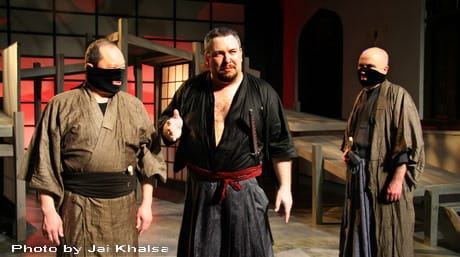 “Life is but a dream,” says the samurai Takiguchi (Patrick Bussink) “but in the lotus blossom is the beginning of reality.”

He is preparing to cast off his worldly delights and ambitions to live a life of prayer, meditation and self-denial. In so doing, he hopes to in some way make up for the unspeakable, unforgivable crimes he has committed.

Here are the crimes: he has accidentally permitted the Empress’ pet titmouse to escape. Although it is of no moment to the Empress (Rahaleh Nassri), who soon after releases all her songbirds, it has disgraced Takiguchi’s family and brought shame to the young man. In addition, he has presumed to fall in love with the sweet and down-to-earth Yokobue (Nelina Giridhar), one of the Empress’ Ladies-in-Waiting – another unthinkable act. This is the Imperial Court of twelfth-century Japan, where every unbending step must proceed from an unyielding protocol.

Separated from us by three hundred years and eight thousand miles, Fair Ladies at a Game of Poem Cards presents theater companies and audiences with some formidable challenges. Rorschach Theatre, one of Washington’s most literate and adventuresome companies, does about as well as could possibly be imagined in meeting them.

Poem Cards, adapted by the innovative English playwright Peter Oswald from an 18th-century text by Japan’s first professional playwright, Chikamatsu Monzaemon, tells the story of Takiguchi and his friend and fellow samurai, Yoshitsugu (Cesar A. Guadamuz), and their passionate love for and courtship of Yokobue and Karumo (Jai Khalsa), who also serves the Empress. In this they are opposed by Lord Morotaka (the magnificent Scott McCormick), who loves Karumo himself and means to make her his own, or else to make her dead.

Virtue and vice are a construct of time and place, but good and evil are omnipresent and immortal, and director Randy Baker wisely emphasizes the deepest themes in this work. Huge and malevolent, McCormick’s Morotaka sweats corruption with every step and gesture. He does not forget to show us corruption’s soft core; caught in a lie, or in the throes of his ridiculous love for Karumo, Morotaka’s voice takes on an asthmatic, W.C. Fields-like wheeze, and it almost makes him sympathetic. But this is a dangerous guy. Early on, Takiguchi and Yoshitsugu make a fool out of Morotaka, and walk away sneering from his cringing apologies. But they do not see – as we in the audience do – the nuclear fire behind Morotaka’s eyes, and we know that these two young men will be in for a very bad time indeed.

Rorschach’s attention to the work’s principal themes makes the first Act fly. The second Act is not as successful. Chikamatsu wrote this play for puppet theater, in which a narrator describes the actions being undertaken by silent puppets. Some of the puppet-theater roots of the play are evident in the second Act, in which characters periodically narrate the events they are experiencing. This, of course, is Oswald’s responsibility, not Rorschach’s. Perhaps Oswald did not anticipate that theaters would stage the play as effectively as Rorschach did, thus rendering some of the narrative dialogue superfluous. There are also some plot holes the size of Seattle. If you approach this play expecting the same sort of tidiness you expect from a contemporary Western play, you will enjoy it less.

That being said, there were parts of the second Act which were wonderful. The opening scene, in which Yoshitsugu’s brother Moritsugu (John-Michael MacDonald) and Takigushi’s father Katsuyori (Paul McLane) squabble about whose prayer mat should be in front of the other’s, is hilarious. And Chikamatsu has a nice feel for symmetry. Near the beginning of the play, Yoshitsugu playfully carries Yokobue on his back, mistaking her for his lover Karumo; towards the end, when Yokobue, dying from exposure, can no longer struggle through the mountains on her search for Takigushi, Yoshitsugu again carries her on his back.

Chikamatsu has been compared to Shakespeare. This is unfair. No one can be compared to Shakespeare, a writer so freakishly brilliant that four hundred years later he still seems like a sport of nature. But Chikamatsu wrote beautifully and with great heart and compassion, and you will remember some of the startling images from this play for quite a while.

The four actors who portrayed the young lovers made them fresh, compelling and very appealing. Khalsa’s Karumo was a little inaccessible at first, but she has some very fine scenes with Morotaka where she reveals a fire which is more than a match for the villain’s bullying.

The supporting cast was uniformly strong. Two actors merit special mention. MacDonald, in addition to playing the priggish Moritsugu, portrayed the moronic executioner Genjo and a libidinous servant with such precision and subtlety that I was astonished to discover later that the same actor played all three roles. Al Twanmo played the Empress’ brother Shigemori with great wit and spot-on comic timing. His deflating response to one of Morotaka’s bursts of oratory got the biggest laugh of the evening.

If you are willing to suppress your demands for narrative tidiness and go with your heart’s ear tuned to the music of language, Poem Cards will give you a rich and pleasant evening.

It’s time for Rorschach to start a building drive. Due to its burgeoning reputation, the 90-seat theater is increasingly prone to sellouts. Last night was packed, and economy-size reviewers such as myself felt a little squeezed.