Let’s get this out of the way.  From the first moments of this play to the final bows, the brave and generous actors in this production are, save for some stage mud and grass stains, completely naked.  For some people, the thought of the human form undisguised by clothing is so shocking, repulsive or frightening that it is impossible for them to think of anything else.  Such people should not see this show, and my review will be of no further use to them. 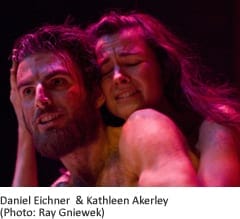 For the rest of us, José Carrasquillo’s concept takes Macbeth to places it has never been before, and brings a startling clarity to the depredations of the title character and his wife.  Shakespeare, of course, is tremendously malleable.  Consider the modern-dress Hamlet currently at the Shakespeare Theatre, or the 1930s-era Midsummer Night’s Dream Joe Banno directed at the Folger’s last year, or the swingtime Much Ado About Nothing  before that.  Shakespeare has worn cowboy clothes and space-age garments.  Here, for the first time, Macbeth is done at the dawn of civilization, where humans were still fully animals, and the human conscience was just emerging.

Imagine a forest of towering slender objects, faceless and silent (Marie Schneggenburger made these astounding things).  They might be gods, or trees, or both.  It is the hour before dawn.  Suddenly, a chorus of hisses arises, followed by a screeching, a crash, and silence.  A forest animal might have made that sound, or a human, or a creature that is both.  From different corners of the forest, three women (Ashley Robinson, Heather Haney, and Manshu Chang), sleek as otters and naked as snakes, crawl toward a pool of water, growling and snarling.  Once at the pool, they begin their incantations.  This is our introduction to Carrasquillo’s world of Macbeth.

Macbeth is peculiarly suited to a setting in prehistory, for it is a story of unrelenting brutality.  Macbeth (Daniel Eichner) first comes to our attention, and that of King Duncan (Christopher Henley) for mercilessly slaying a rebel, and then stuffing his head on a pike.  For this, Duncan awards Macbeth the title of Thane of Cawdor in absentia.  Later, Macbeth and his close friend Banquo (Sasha Olinick) run across the three witches, who prophesy that he is to be Thane of Cawdor, and then King, but that Banquo would be father to a line of kings.  When Macbeth learns that he has indeed become Thane of Cawdor, he takes the prophesy seriously.

So does his wife (Kathleen Akerley).  In traditional productions, Lady Macbeth learns of the prophesy through a letter from her husband.  In keeping with the influence of magic and elemental forces which animate this production, she reads it in a pool of water.  It delights her to think that she might soon be queen, and when her husband returns, she urges him to assassinate the King.  Macbeth agrees, but develops cold feet when he reflects that Duncan has been good to his people, and generous to him personally.  It is only when Lady Macbeth questions her husband’s manhood that he kills his king and implicates the king’s guards in the murder.

Duncan’s sons, Malcolm and Donalbain (Jay Hardee and Denman C. Anderson, respectively), fearing that they will be next, flee, and Macbeth takes power.  But he is not easy with it.  He remembers the prophesy about Banquo’s sons, and broods that he has heroically killed his King only to profit Banquo’s issue.  Having tasted murder once, he finds it easy to kill again, and commissions two cutthroats (Hardee and Anderson) to murder Banquo and his son Fleance (Chang).  They half-succeed; Fleance escapes.  Still living in fear and now haunted by Banquo’s ghost, he consults the witches again, who warn him against his loyal lieutenant, Macduff (Henley).  Off go the cutthroats, but in their incompetent fashion they miss Macduff and kill instead his wife and son (Robinson and Henley).  Macbeth’s ghost-haunted Scotland continues to simmer and erupt in the blood of murder and suicide until Macduff brings Macbeth’s head, detached like that of the rebel’s whose death opened the play, before Malcolm, the new King.

This is Macbeth before the fall of man.  Guilt, which accepts the consequences of evil acts, is common (“What if we fail?” Macbeth, contemplating regicide, asks his wife; “Then we fail,” she snarls back.) but shame, which makes some evils unthinkable, is a developing art.  It is prelapsarian, but it is no Eden.  Everyone is both predator and prey, and the days are filled up with killing and feasting.

There were a few things about this production which I wish worked more effectively.  There is so much doubling and tripling of roles (ten actors play thirty-one people) that the story becomes difficult to follow at times.  Understand before you watch that Henley plays both Duncan, the King, and Macduff, the man who finds the King’s body; when he arrives at Macbeth’s castle the morning following the bloody murder. it is as Macduff.  Akerley plays both Lady Macbeth and Hecate, bitch-goddess of the witches; when she appears to the witches it is in the latter role.  (I do not believe that Carrasquillo meant to suggest that Lady Macbeth and Hecate were one and the same).  Olnick is both the bleeding messenger who tells Duncan of Macbeth’s triumph and Macbeth’s friend Banquo; when he appears with Macbeth in the third scene it is not the messenger, miraculously healed, but Banquo.  Likewise Olnick plays a hung-over porter (beautifully, I might add) who answers the door the morning after the regicide.  Usually these role transitions are aided by a change of costume.  In this production, such assistance is unavailable.

I also wish that Carrasquillo had not been quite so respectful with the script. This production is as penned by Shakespeare, absolutely uncut.  Necessarily, Carrasquillo adds moments to allow us to witness the primeval nature of the setting, and as a result the production weighs in at two and a half hours, counting an intermission.  That the theater’s air-conditioning was inadequate on Tuesday to handle the massive audience also contributed to the general impression of excessive length.

On the other hand, there are many things about this production which are simply marvelous.  Akerley is chilling as Lady Macbeth, bringing to mind the “smiling villain” Hamlet accuses Claudius of being.  She is even more chilling as Hecate.  It is she, more than anyone else, who reminds us that humans are also animals, and that we are in nature, tooth and claw.  (It is no coincidence that when Macbeth expresses misgivings about killing Duncan, she challenges his manhood.  Propagation of the genetic line is the animal imperative).

Olnick is also outstanding as stout-hearted Banquo, from whom James I believed himself, incorrectly, to be descended.  Banquo is a man who holds a bouquet of contradictions in his heart; he is skeptical of the witches, and yet intrigued by their guaranty to his posterity; he loves his friend, and yet has grave misgivings about him.  Olnick manages to make these contradiction simmer uneasily but naturally within the character.  And, as I mentioned earlier, he is outstanding as the porter.

Perhaps the most remarkable element in this production is Carrasquillo’s treatment of the witches.  In Chang, Haney, and Robinson’s superb portrayal, you can see instantly what they are: humans gone feral.  They have tried being human, and they decide they like animal better.

The actors’ nudity provides an extra dimension to their presentations.  You see their muscles ripple and contract as they stalk each other; their lungs heave as they suffer and weep; their stomachs contract and twist as they receive bad news.  Actors have these reactions while clothed, of course, but we seldom see them.  By being physically naked, these actors become emotionally naked as well.

This production of Macbeth is a great gift to those who have the will to receive it.  We are unlikely to see anything like it in the foreseeable future.

(Running time two hours, thirty minutes (including one intermission)). José Carrasquillo’s Vision of Macbeth continues Thursdays through Sundays until July 15.  Tuesday through Saturday shows are at 8; there are 2 p.m. matinees on Saturdays and Sundays.  Thursday tickets are $25; Friday and Sunday tickets are $30; Saturday evening tickets are $35, and Saturday matinees are pay-what-you-can.  For tickets, call 800.494.8497 or visit the website.

On opening night, director Jose Carrasquillo spoke with us about his unique vision for the play. Listen here.