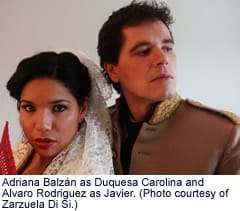 Opening night at the Mexican Cultural Institute buzzed with excitement and anticipation. The grand staircase, lined with towering wall murals, invites you into Pan-American history. It’s a great venue for the charismatic baritone Josê Sacin, who is well-known locally in the Latino community as an opera singer with the stage presence of a lion and an impressive vocal range. In mid-April, his voice of liquid gold was heard soloing in the Papal mass at the Nationals Stadium. If that credit, among his many, doesn’t impress you, then take note of his talent as a dynamic, local leader in the music world. He’s the Artistic Director of Zarzuela Di Si which is behind this pared-to-the-core staging of Federico Moreno Torroba’s musically gorgeous drama Luisa Fernanda. Along with a large cast of blossoming Latino performers from all over, Sacin sings the Vidal Hernando role from his soul. The experience is uniformly glorious.

Equally impressive tenor Alvaro Rodriguez takes on the complex Colonel Javier Moreno, the “soldier of fortune,” the charming rake. Instead of eliciting hisses from the audience, Rodriguez’s refreshing portrayal of Javier matches the power of Sacin’s Vidal.   Javier, blinded by the dowry and the social position of Duchess Carolina, sung exquisitely with haughty, coquettish sophistication by Adriana Balzan, jilts the heroine, Luisa Fernanda.   The title role is sung by silky-toned soprano Laura Virella, with a sweet innocence that evolves into the fiery indignation of the rejected woman.

The plot is a simple love triangle. A mature, noble landowner, Vidal Hernando (Sacin), is going low profile as a simple farmer and a republican in 1868 Spain, to win the heart of a shopkeeper’s daughter, Luisa Fernanda (Virella). But Luisa is madly in love with Javier (Rodriguez), the dashing opportunist who prefers the aristocratic, wealthy widow, Duchess Carolina (Balzan), (who could be based on Bizet’s street-wise Carmen.) Luisa agrees to marry Vidal, who wises up that Luisa still aches for Javier and encourages Luisa to remain true to her heart, even though the younger man has been cruel to her. Written and composed in 1932, the ending is decidedly unresolved and modern.

The story line , however, is not easy to follow. A zarzuela is based on the word zarza, or bramble bush and after the first act, I felt  caught in a bramble. I wasn’t alone. A Spanish-speaking parent of one of the child-actors told me at intermission he would ask his daughter to “explain the story.” It’s those references to turbulent Spanish politics, the characters’ changing allegiances from monarchists to republicans under Spain’s Queen Isabella II, creating the confusion. Although listing the cast “in order of vocal appearance” helps, the audience needs a plot summary in the program.

Happily the music, as challenging as Mozart’s operatic singspiels, transcends the tangled plot. Just open your ears and your hearts.   Over a year ago, the bell-like tenor voice of Rodriguez caught my attention in the zarzuela The Bohemians (Bohemios), by Amadeo Vives, a joint effort from Teatro de la Luna and Opera Theatre of Northern Virginia in February 2007 (reviewed by DCTS). This young opera singer proves he can let out all the stops but also shades his voice for sensitive moments. Hopefully, Rodriguez will continue to strive for the pianissimo nuances, as in the famous aria “De este apacible rincon de Madrid.” (In this calm corner of Madrid), that has become one of this zarzuela’s most memorable folk melodies and solo concert hall favorites. Both Sacin and Rodriguez have the confidence to deliver high powered arias that could project to the back row of a big opera house.

The female singers are equally good, especially in the confrontation scenes between the Duchess Carolina (Balzan) and Luisa (Virella), who stands up “for a new order….Away with class divisions.” The corps of children who dance and sing in the village square scenes are well-disciplined and delightful and enthusiastically involved. The lilting, memorable melodies, accented by Spanish syncopation are given a free and openly flexible flair by pianist Gabriel Ruiz-Bernal. The surtitles, although mounted to the left of the proscenium stage are excellent and clear.

In Spanish with English sur-titles.