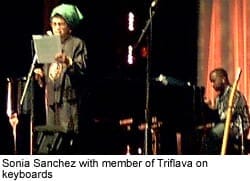 The 2008 DC Hip Hop Theatre Festival kicked off with a bang last night, as the Brave New Voices College Tour took the stage at The Kennedy Center’s Millennium Stage.

The audience packed the house to see and hear the evening of spoken word poetry which featured Sonia Sanchez, The D.C. National Youth Poetry Slam Team, Brave New Voices, and Triflava who served as the house band.

Triflava a “progressive hip hop band” kept the show moving at a fever pitch, with their mix of piano/keyboard, beatbox and drums to keep the mood going between poets.  Triflava infused instrumental versions of hip hop songs including “real love” originally performed by Mary J. Blige. Mike P of Triflava performed on the djembe, with beat box accompaniment by the other 2/3 of Triflava. 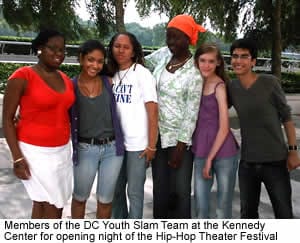 Brave New Voices and The D.C. National Youth Poetry Slam Team both performed sets that contained poignant observations of their surroundings. Each team recited high and mid-tempo pieces and paired theatrics with the words for a true spoken word experience.

Safia Elhillo, Sohayl Vofai, and Molly Barth from The D.C. National Youth Poetry Slam Team performed poems that were reflective of their ideas about life, religion, and spoken word.

I had the opportunity to speak to the D.C. National Youth Poetry Slam Team members before the performance. These exceptional young people think, act, and speak as one body. They all spoke about the life changing experience that being a part of this event has been. They each spoke of how they have become like family to each other because of this experience, the amount of respect and camaraderie between them is like nothing I have seen in a long time.

“We spent so much time together outside of the five hour practices” says Bianca Davies. “I don’t think any of us really knew what we were getting into at first- but looking from then to now and seeing how much we have changed, how much we have grown” added Sohayl Vofai.

The San Francisco-based Youth Speaks Brave New Voices group kept the energy of the evening going performing pieces that reflected their heritage and the trials of living in inner city neighborhoods.

I spoke with world renowned poet Sonia Sanchez about her involvement in the Brave New Voices College Tour, and asked about her impact on the younger generation, and what she expects of them.

“I try not to ever tell people what to say, I may lead them, advise them to try something else” comments Sanchez about what she thinks of the direction that hip hop and spoken word is going in.

When asked about what keeps her caring so much, Sanchez had this to say: “I know that they (the youth) live very difficult lives, and I do not consider it a burden at all to have an open dialogue with the youth.”

Ms. Sanchez hopes to influence the young people because she realizes how hard it is for them to survive, because of things like war, lack of quality jobs outside of the military, and teachers who do not wish to teach them.  She adds “A young man in high school asked one of his teachers if they could have a discussion about peace (with respect to the war) and that teacher called him a terrorist.”

You can watch video from last night’s performance of the Brave New Voices College Tour here.

— Were any of you there?  Share your thoughts with us in ‘Comments’.