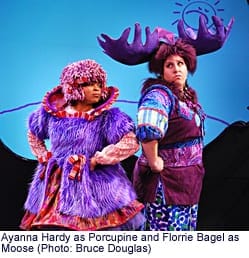 Adam W. Roberts has taken the purple and white book about Harold and his purple crayon, added a few characters, peppered his play with lots of songs, and turned it over to Adventure Theatre for its world premiere.  Judging from the squeals of delight and hoots of laughter from the tiny tot audience, Roberts’ Harold and the Purple Crayon is a big hit.

For those of you who believe you can trust in yourself to find your way out of even the scariest scenes, you may have Harold to thank. Crockett Johnson’s Harold and the Purple Crayon has been teaching those lessons for over 53 years.

In Roberts’ musical, Harold (a charming Josh Sticklin) is a lonely, scaredypants boy who never wants to leave his room – until the night the Purple Crayon (Branda Lock) visits, eager for some excitement. Before he knows it, Harold is out the window and off to adventures on land where an apple-hating dragon presides, on sea, onto an island picnic of pies, into the air, and finally landing with a bump in the big city before finding his way home.

In the play, Harold and his crayon are not alone. A talented ensemble of quick-change artists play taunting kids, friendly travelers, philosophical sailors, and balloonists.  Each gets a solo spot: John Dellaport shows near-operatic skills as the Dragon, Javi Harnly is a Policeman straight off the pages of the book, and Florrie Bagel and Ayanna Hardy are standouts as the Moose and Porcupine, respectively.

What the play needs is an outstanding Purple Crayon, and Adventure Theatre found it in Branda Lock, whose pure voice and refreshing performance makes her an actor who deserves to be seen more often.

While the play opens in a purple mood set-wise, it’s quickly dispelled by a riot of colors thanks to Katie Touart whose detailed, gorgeous costumes light up the stage and keep the ensemble busy with changeovers. Most outstanding are her designs for the dragon, the moose, the shaggy headed porcupine, and the headdresses for the hot air balloons.

The clever set (Elizabeth Jenkins McFadden) is backed by projections inspired by the book. Kudos to both McFadden and to Deborah Wheatley who created the artwork.

Roberts’ music seems to have been written for the adults in the audience. Perhaps a tad complex for little kids -definitely no sing-along songs – the lyrics are smart, syncopated and funny. And the kids don’t notice, with all the colorful costumes, movements and surprises going on.

It’s Michael J. Bobbitt’s direction and choreography that keep the show moving, splashy and surprising. He manages top flight production numbers  without, well, making a big production of them. The ensemble slips into tap, ballet, and jazzy routines as easily as they slip into those costumes.

So – will the kids like Adventure Theatre’s Harold and the Purple Crayon? According to one expert in the audience, it’s a definite “whoah!”  And if by chance you’re feeling a little stressed this week, connect with your inner Harold. Go see the show. Ride the Dentzel Carousel after. And keep the book Harold and the Purple Crayon nearby. He’ll remind you you can never get so lost that you can’t find your way home again.

–  Need some Harold now? Here’s a link to the 1969 animated version of Crockett Johnson’s book.

– Got some stubby crayons?  Bring them to the Adventure lobby for recycling (they’ll become new crayons for the kids at NIH) and get a brand new – what else? – purple crayon.

Note:  Michael J. Bobbitt directed my play Queen of the Bohemian Dream in Capitol Fringe, 2007. It has not affected my review.