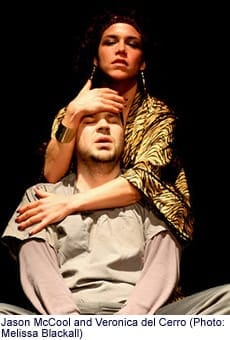 The Last Days of Judas Iscariot was the winner of DCTS’s Audience Choice Award for Best Play last season, Forum Theatre’s remounting of the production has its original cast with one exception – Heather Haney now plays the role of Mother Theresa, originally played by Maggie Glauber. Here is a reprise of  our review of the original production.

I’ve taken more time than I usually do to write this review because I wanted to be sure you understood how good this play is. I wanted to tell you in plain and direct language the nature of the thing that you have before you.

It’s not that it’s simply good theater, with a tight dramatic arc and developments which are both outrageously funny and absolutely credible within the parameters of the story…although it is all of that. Nor is it simply that some of our best actors – Hemmingsen, McCormick, del Cerro, Jorgensen – do some of their best work ever, although they do. It is that The Last Days of Judas Iscariot is a moral act, which can bring grace to the stricken heart. It will both entertain you and make you think. It could save your life.

Guirgis is best known for Jesus Hopped the ‘A’ Train, a well-regarded prison drama in which a serial killer claims to have received the forgiveness of Jesus. Last Days is a hundred times better – a deeper, more focused, more mature examination of sin and forgiveness.

Judas (Jason McCool) is adrift and catatonic in the Ninth Circle of Hell. Responding to the pleas of his mother (Margery Berringer), Saint Monica (Veronica del Cerro) agitates for a writ of habeas corpus, which God eventually issues. (Guirgis’ amusing conceit is that the ethereal Monica, a woman who prayed daily that her son, St. Augustine, be delivered up from sin was in fact a professional nag, with the vocabulary of a hip-hop longshoreman). Judas, locked in for nearly two thousand years, is about to have his trial.

He is represented by a tough, modern professional woman, Fabriana Aziza Cunningham (Julie Garner), the daughter of a gypsy and a priest. The buffoonish, deadly Yusef El-Fayoumy (Scott McCormick) is the prosecutor. Presiding: the furious Judge Frank Littlefield (Brian Hemmingsen), who in life was a Confederate general who hanged himself on the day Lee surrendered at Appomattox.

Courtroom drama is a wonderful way to highlight ideas in opposition – think Inherit the Wind, The Andersonville Trial, or the marvelous Disputation which Theater J did a few years back. Here, the stakes are as high as they can possibly be, for Cunningham manages to put the very concept of personal responsibility on trial. She calls on Sigmund Freud (Jesse Terrill) to argue that Judas’ suicide shows that he was no more in control of his behavior than is a man with a cold who sneezes . (In his bombastic cross-examination, El-Fayoumy hammers Freud for his cocaine use, calls him “Dr. Fried,” and then says, “Oh, I made a you-slip!”) Cunningham also seeks to forgive Judas’ act by grounding it in high purpose. She calls on an apostle, Simon the Zealot (Cesar A. Guadamuz, also very fine as a bailiff on work release from Hell), to show that Judas’ real intention was to put Jesus in a place where He would be compelled to use His messianic powers, thus bringing about the liberation of Israel from Rome.

But the real sin of Judas was not his betrayal of Christ. Instead, as Mother Teresa (an excellent Maggie Glauber) points out, it was despair. To Mother Teresa, quoting Thomas Merton, despair is a supreme act of ego, in which the sinner takes pride in a sin so great that no one in the universe can forgive it. Nathaniel Hawthorne plowed this same territory nearly two centuries ago in Ethan Brand, in which the protagonist, after a search for the unforgivable sin, discovered that it was…to seek out an unforgivable sin. Judas ended his life, Mother Teresa argues, rather than beg for forgiveness.

The high point of this trial (or of any trial, I would imagine) is the testimony of Satan (Jim Jorgensen). Called by the prosecution to show that Judas committed his betrayal without any suasion from the Prince of Darkness, Jorgensen’s Lucifer is a bad-ass Disco King, loaded up with an Obama-full of charisma. He jokes with audience members; he admires the prosecutor’s suit and defense counsel’s legs; he glides through the courtroom as if it was a dance hall. He radiates evil’s most compelling aspects: its certainty in itself; its unconditionality; its unrelenting purity. Jorgensen as Satan is magically and magnetically evil, with all the wondrous attractiveness evil implies. It’s the best performance I’ve seen from him at least since The Autumn Garden at American Century two years ago.

But he is matched by Hemmingsen, who is marvelous as the Judge and even better as Caiaphas the Elder, bearing on his shoulders two millennia of Christian censure (he also does fine work in a cameo as St. Matthew); by McCormick, who brings his unique combination of tomfoolery and menace to the role of the prosecutor; by Garner, an actor we should see more often, who shows us the vulnerability wrenched out of her character’s steely shell; and by del Cerro as the foulmouthed saint. Patrick Bussink makes a brief appearance as Jesus, so full of life that he will remind you of what one commentator said – that had He not called Lazarus by name, they would have all come out of the grave. More than this: the production shows two young actors establishing their credentials beyond serious question. Frank Britton plays Pontius Pilate as though he was a battle-hardened drill sergeant in his courtroom battle with Cunningham, and then drenches her with an icy dignity, mined from some hard place. Britton is rapidly becoming a premier selection as a character actor in the Washington area. Jason McCool mostly sits in his infernal circle, frozen in pain and bewilderment, but when he is called upon to bring Judas Iscariot to life, he will break your heart. It is leagues ahead of anything I have seen McCool do in the past.

It should not astonish you to discover that John Vreeke directs this production. Whenever a play delivers a powerful emotional message – be it The K of D at Woolly Mammoth, or Bal Masque at Theater J, or Girl in a Goldfish Bowl at MetroStage  – we seem to find Vreeke’s hand at the helm. He has done his customary excellent work here.

I cannot leave this review without mentioning the character the play is about. It is not about Judas Iscariot, who has been dead for nearly two thousand years, or about any of the grand and outlandish characters I have hitherto described. It is, instead, about the relentlessly normal Butch Honeywell (Frank B. Moorman, perfect in the part), a cow-town college teacher who, thirty or so years previous committed the unforgivable sin, and who, like Judas, and like the rest of us sinners, seeks the grace to forgive himself.

Modern Western theater has its roots in Church pageantry, which sought to bring living witness to the presence of grace. Six hundred years later, with this beautiful production of a play where Saints curse and Satan testifies to the love of God, we may have gotten it right.