Jan 3, 2009 – Arena Stage’s open call Finding Yolanda Casting Search was a day long affair, but at the end of nearly 12 hours, we were close to learning which talented local actress/singer/dancer extraordinaire will join the cast of Crowns, having its fourth Arena Stage production at the Lincoln Theatre from March 27th to April 26th.

Let’s see if you can predict who the winner will be.

So, who is Yolanda? She is young and fierce, the rebel – tough and powerful, yet naive and vulnerable – and innocent. It will take a special performer to play this role. Yolanda opens the show with the rousing song, “Where I Belong.” She has to knock that song out of the church’s roof, and has to grab the audience’s hearts right away.

As I entered the Lincoln Theatre at 7:45 a.m., the lines were growing as young – and not so young – actresses were registering, picking up their numbers, and those who had already signed in, were nervously sitting on the steps of the Lincoln, waiting for their 90 second moment in the spotlight, when they would sing their audition song in front of the morning judges: Crowns director Kenneth Lee Roberson, Arena Stage’s casting director Daniel Pruksarnukul, Arena Stage’s Associate Artistic Director David Dower and musical director e’Marcus Harper.

After all the morning and early afternoon auditions were over, there were 21 callbacks, and I was given the opportunity to interview them all. So, sit back, listen and enjoy and see if you can pick out the future Yolanda.


Ayanna Howard, 23, is a graduate of Duke Ellington HIgh School, and heard about the audition through her former teacher. “She’s in transition. She’s from the city. I’m from DC and moved to Atlanta. I’m in the process of finding myself, just like she had to do, in the church. I just think I’d be great for the role.”

Betty Carter heard about the audition on Channel 7. She’s worked with the Paul Robeson Inner City Center and was Glenda in Howard University’s The Wiz. “I like things exploding, and I think I’d explode onstage.”

Chelsea Harrison, 18, heard about the audition through her high School, Duke Ellington. “Yolanda and I are the same person. We’re both at a point in our lives. We’re discovering our heritage, we’re discovering who we are and accepting our faults. She starts out feisty and ends up in a spiritually connected place, and that’s hopefully where I’m going as well.”

Fatima Quander, 29, saw the audition on the Equity website. “I have a lot of older women in my family so I grew up listening to stories. My grandmother used to wear hats, even though she was from Barbados. I lived a few years in Brooklyn for two years, so I consider New York my home just as much as DC where I was born and raised.”

Jade Jones, 18, is from Westfield High School. It was her appearance on ABC’s 20/20: ‘The Making of a High School Musical’ that got her invited to the audition. “Gospel is my roots, and I relate really well to Yolanda. I’m young. I was a rebel when I was younger. I’ve had a lot of loss in my life, and have risen up from it.  I’ve gone to church and met women with their ‘crowns.’ and the music is awesome.”

Jamé Jackson, 15, learned about it through her drama teacher at Wakefield High School. “She’s my age, and she’s feisty and she likes to rap. I’m really going to enjoy this role, because I think I can get it.”

Jasmin Johnson is 23. Word of the audition came through the email group ‘Galganize’.  “I don’t think there’s a role that any person is 100% perfect for because there are flaws in everyone. I am a moldable actor.  I want direction. I want to learn, I embrace every experience to learn and I consider it a privilege to be onstage in such as awesome craft as acting.”

Jenay McNeil is 16. Her mother found the notice on the Arena Stage website. “I think I can play someone who has been through trials and tribulations.”

Keziah John-Paul, 16, is a student at Duke Ellington High School. “I love Yolanda. In lots of ways she reflects me. I have some powerful church women in my family, so we have an understanding of crowns stretching back to Africa. My grandmother, especially, wore lots of hats.”

Kiah Victoria, 16, a student of Bowie High School has been singing since she was 5 and played Nala in The Lion King on Broadway. She heard of the audition through her dad, who also serves as manager to the busy actress. “Yolanda is a young girl trying to find out who she is and how to be comfortable in her own skin. I’m in high school and I think I can do it really well.”

Loren Bray, 23, first read about the audition on CraigsList. “When I was a teenager, I never felt like I had a voice, as opposed to older people always speaking for us.”

Lulu Fall, 23, found the audition on the Arena Stage website. “I believe that myself and Yolanda have a few things in common – I tend to be a bit feisty, I lived in Brooklyn and I can bring all that to the role.”

Martina Green is 18, and learned about the audition from her Westfield High School theatre teacher. She has been singing at her church, Kirkland Memorial Church of God in Christ in Camp Springs, MD.

Shanté Moore, 27, “I’m a little bit over, and I’ve been through different things, so I am an example of triumph over adversity, so I can bring that to the role.” 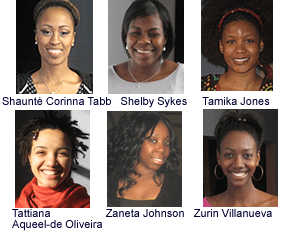 Shaunté Corinna Tabb, 31, has been seen as Lorrell in Dream Girls, Brenda in Smoky Joe’s Cafe (both for Winters Lane) and as Lorraine in Toby’s All Shook Up.  “I’m perfect because I can relate to her. She’s gone through some things in her life, and lived with her grandmother, and I went through the same thing.”

Shelby Sykes is from Winston Churchill High School, and was in the high school version of Rent which Joel has featured in this column. “Yolanda goes through many changes in her life, and being a 16 year old teenager there’s been plenty of changes, and I know there will be more.”

Tamika Jones has also been featured on DC Theatre Scene for her appearance as a hip hop artist in last summer’s Capital Fringe Festival and sings with jazz bands around town. She met Crowns judge e’Marcus Harper when she was a student at City at Peace High School in DC. “I see so much of myself in Yolanda. I was once a young girl trying to find my own way, but I had so many obstacles, lost so many people, I want to show young girls we can bounce back and be resilient and still be beautiful.”

Tattiana Aqueel-de Oliveira, 20, grew up in DC and now studies acting at Rutgers University. Her mother told her about the audition. “I definitely grew up going to church. I know the women with the hats, running up the aisles, shouting, making a circle around them so they won’t get hurt. It’s a wonderful memory and shaped who I am.”

Zaneta Johnson found the audition on CraigsList. “This is my first time performing, so I am working off of sheer adrenolin and heart.”

Zurin Villanueva, 21, is a senior at Howard University majoring in musical theatre. “I’m from Brooklyn so I know exactly what that’s all about.”

All the callbacks were given a packet that included a scene from Crowns that they would have to read, act, and interpret in their own special way for the evening finals. The monologue began with a speech by Wanda – not Yolanda – her big moment in Crowns. It began with, “I’m having a bad hair day up under my hat…”

As the evening callbacks began, director Roberson taught the finalists ‘I’ve Got Joy Like a Fountain’, the song Yolanda sings during a ceremony of laying on of hands and baptizing, which initiates her into the circle of believers and Crowns wearers. One by one, the women sang the song with heart and soul and joy – in their own special keys and ranges. Applause rang out after each rendition by the appreciative judges and the families and onlookers who sat in the balcony. There was joy like a fountain all through the Lincoln Theatre. Oh, what joy!

Then the moment that many of the callbacks told me they were afraid of!  Director Roberson taught them a new dance, and when the dancing began, the participants were divided into several groups. It was like A Chorus Line sped up. It was dizzying watching these young actresses sweat their butts off, trying to please the new evening judges  – Artistic Director Molly Smith, veteran actress Marva Hicks, who will be starring in this new production of Crowns, who joined Dan, David, e’Marcus and Kenneth, who judged the earlier auditions.

After the dance audition, several cuts were made, and those who survived were asked to sing their morning audition song, or a new song. More applause rang through the theatre as each song was sung. And then, the monologues began. No two callbacks read and acted this scene the same way. They thrust themselves into their own interpretation, and it was a wonder to behold. You would think they all had decades of experience on the stage. And, again, as you could probably guess, there was loud applause after each monologue performance.

In between the dancing and the singing and the readings of the monologue, the judges asked the contestants to wait in the lobby until they were called in, so they could hit heads and talk about who would be their Yolanda. I promised not to divulge what I heard, but needless to say, with all that talent on the stage, they were having a very difficult time deciding. I wouldn’t have wanted to be in their shoes.

I will proudly say that the 3 callbacks that I liked the most, were still standing at the end, and the one person whose velvet voice I fell in love with – Betty Carter – who was the veteran of the group, called me at 10 PM to tell me that she had been offered a swing position with the show, and thanked me for the encouragement I gave her during the day. Great move, judges!

At the end of the night, as they were all packing it in, I sat down with four of the survivors – Chelsea Harrison, Keeziah John-Paul, Lulu Fall and Tattiana Aqueel-de Oliveira. As you listen to this finale podcast, you will hear four confident and talented artists, who were so grateful after this grueling day, to have had the opportunity to participate in this day’s auditions. It wouldn’t surprise me if one of them became the Yolanda Arena Stage was searching for.

Arena Stage will announce their choice for Yolanda Monday, and we will post the news on DCTS.

Here’s your chance to send ‘notes’ to the finalists.  Leave a comment below and tell them and us who you would like to hear sing the role of Yolanda this spring.