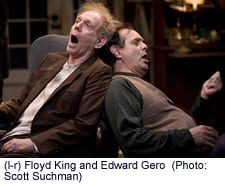 Some plays set the stage not only literally but figuratively, preparing the audience for what will occur over the course of their action.  And then there are those whose sets are more deceptive: where a cozy walnut, velour and floral-carpeted interior, a slim Christmas tree ablaze with lights, and the familiar strains of “Do You Hear What I Hear?” from a home stereo are not indicators, but prevaricators.  In Conor McPherson’s Tony Award-winning, booze-infused, Faustian tale of the lengths and limits of friendship and brotherhood, such time-tested signs of warmth, faith, and family become instead ironic (demonic?) commentary on how easily we are deceived, how dangerous credulity can be – and how, in the end,  the devil truly is in the details.

“Sharky” Harkin (Billy Meleady) has come to live with and care for his newly blind, sobriety-challenged brother Richard (Floyd King), a gentle, good-humored, staggering, slurring, unkempt mess of a man, whose bathroom habits would probably have him bounced out of even the seediest bar.

Joining the brothers for a game of cards this Christmas Eve are two friends, Ivan (Edward Gero) and  Nicky (Jeff Allin).  Nicky, a devil-may-care bluffer whose cockiness just begs to be knocked out of him, can more or less hold his liquor.  Bragging about his Versace jacket with a playboy swagger – “German, made of dog skin,” making Richard cringe – his bravado will recede as the play progresses, to reveal a man whose humanity surpasses his mates’.

Ivan, on the other hand, doesn’t seem to know his limit, and spends much of his time stumbling about in a perpetual haze, alternating between torpid stupor, basset-eyed sadness and roaring drunkenness (Gero is utterly glorious), interrupted occasionally by the dim recollection that – ooh, yeah – he’s looking for his glasses.  While Ivan could probably drink Richard under the table any day of the week and twice on Sunday (at one point they join forces to track down the last bottle, then finish it off faster than you can say ‘cheers’), he seems to enjoy it less.  We will soon learn why.

Meanwhile Sharky, while reluctantly hosting this impromptu party, has other concerns, which he tries unsuccessfully to keep out of the conversation, and which thereby remain disturbingly, tantalizingly vague.  Their full import and impact must await the arrival of an uninvited guest: the dapper, sepulchral Mr. Lockhart (Philip Goodwin).

An elegant vision in black, white, cream and gray, this catalyst for what we begin to sense may be an impending cataclysm – McPherson’s skillful interweaving of ribaldry, melancholy, and the almost imperceptible threat bubbling beneath, keeps us perpetually off-center – has been invited by Nicky to join them for a drink and game of cards.  Supposedly a stranger to the rest, upon being introduced to Sharky, Lockhart insists they’ve met before.  Sharky denies it, only to have Lockhart coolly recall the precise circumstances when, twenty-five years ago, Sharky killed a drunk in a back-alley brawl and Lockhart kept him out of jail.  “We had a deal; we played cards for your freedom.”  And now, they will play cards for his soul.

Goodwin as Mr. Lockhartt, is good in the role, but only occasionally fully owns it with the unequivocal if carefully cloaked evil, the oily menace and sheer power one might expect.  Meleady, a native-born Irishman, playing Sharky both here and in Boston last year, evinces the gaunt, hollow-cheeked, haunted mien of a man who has seen death, and is even now looking down into his own grave.  Watching Sharky silently deal with his own private demons, as the others’ intoxicated shenanigans take center stage, is at once chilling and foreboding.

There are moments of poetry aplenty.  In an affecting soliloquy, Richard relates how he dreamt of awakening to find himself, his sight miraculously restored, staring into the orbs of a bluebottle fly.  He describes the fly with childlike wonderment and gratitude, his words almost a benediction, recalling his amazement at the inexplicable expressiveness of the insect’s large, round eyes.  Mr. Lockhart’s discourse is poetry of another sort: a fiendish description of Hell, a place where, he tells his greedily anticipated next victim, the damned are unloved, buried alive in blocks of ice, doomed to endless pain without hope of sleep; a place “where even death offers no release.”

But is Sharky indeed beyond redemption?  In one of the play’s most challenging scenes, Richard gently suggests that his brother has within him the power to again become the innocent boy he once was, then proceeds to wildly harangue and excoriate him with an account of his sins and failings.  Words fly, then fists; in the quiet of their aftermath, we learn why.  And then the game begins.

Kudos go to dialect coach BettyAnn Leeseberg-Lange, who brings working-class Dublin to linguistic life.  While all put on a convincing brogue – Meleady, who sounded plenty Irish to my admittedly untrained ear, told The Washington Post that his years in Boston have left their mark, and he gets teased back home for “sounding too American” – it is Gero’s that steals the show, along with his ability to inhabit Ivan so utterly, you’d swear you could smell him across the floorboards.  Kudos too to Michael Giannitti’s lighting, which provides the soul-extinguishing blackness that envelops Mr. Lockhart, and to the sound design of Neil McFadden, which gives us a whirling, howling, biting wind through the back door that will make you sit up in your chair and almost reach for your muffler.

There are some slow spots, and this early in the run, it may be expected that there are parts that do not always come together as a whole.  But the chance to see performances like these – in a work by one of Ireland’s most acclaimed playwright-poets who portrays with such acuity what the Chicago Tribune calls “the agony of conscious souls” – is a card well worth playing.