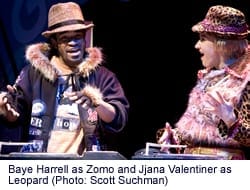 With some artists, you can purchase a ticket on trust, knowing that they will deliver quality goods.  Psalmayene 24 is quickly becoming such an artist.  Renown in the metro area for his uniquely personal and creative flair, poetry slams, and hip-hop infused productions, Psalmayene 24 is now bringing a bippity bop beat to children’s theater using Washington D.C. cultural landmarks as a backdrop.

Once he gets dissed by school friends for being weak and ineffectual, Zomo the rabbit vows to prove them all wrong by becoming powerful and never having to take no mess from anybody ever again.  His quest leads him to the Ultimate power master, Sky God, who promises to grant his request, but he has to do something in return by securing and bringing her three special things: 1) get the dance shoes of Big Fish at the DC Waterfront; 2) get the spray paint can from Wild Cow at the National Zoo; 3) get the turntable from DJ the Leopard in Adams Morgan.  The first act sets up the story and Zomo starts securing the items in trickster fashion, complete with split second lighting and sound cues, and of course, enough toe-tapping rap for a full scale slam.  Along the way, though, Zomo learns the consequence of taking precious items that mean something to others and discovers another purpose for his life than trying to be all powerful.

As usual, Imagination Stage provides a neat opportunity to glimpse the quirky kid side of actors otherwise only seen in “grown-up” productions.  How refreshing to enjoy Tuyet Thi Pham skipping along as Sky God, considering her previous heart-wrenching role in Rep Stage’s In the Heart of America. Paige Hernandez showed her sizeable comedic range in the  thought provoking “Am I Black Enough, Yet?” and dances up a storm as Big Fish, while also serving as choreographer.  Jjana Vlentiner as Leopard will soon be doing double duty performing evenings in her one-woman show, Funeral Potatoes, and James J. Johnson as Wild Cow was serious as a heart attack in Jouneymen’s Neglect.

With an ensemble this good, the main character has to be a hip-hopping dynamo, and he is, in the form of Baye Harrell, reason enough to see the show.  Harrell, who can bust a rhyme with the best, prowls and struts along the stage with wild-eyed enthusiasm, excitement,  and crowd-pleasing appeal.  Dressed in patches of fur along his sleeves,  a goofy hat over long dreadlocks, and flappy turned-up shoes, he would get a double-take while popping along city streets, but could still make his way.   Costume designer Katie Touart provides more hints and impressionist touches instead of overwhelming full scale body suits, which enhances the urban flow for the characters.

As a world premiere, Zomo will undoubtedly continue to evolve as a work in progress. For now, it’s trying to serve a variety of masters – children of all ages through adults, – and is still finding its footing in targeting its true audience.   The piece is loads of fun, does not “talk down” to youngsters, and the participatory sections feel genuine and organic.

The D.C. landmark references are insightful although the first two – the Southwest wharf and the National Zoo work better than the Adams Morgan domain for the Leopard scene.  There’s nothing to distinguish her apartment from any other in the metro region, and it could just as easily have been in Chicago, New York, or any other city.  Also, some moments seemed to expect a level of sophistication that would only be found in an older crowd, such as Leopard’s observation about a particular beat – “I could flow to that” she says without a hint of an explanation, something that would be missed outside of the poetry slam, hip hop crowd.

Something else that would be missed by a younger audience is the fascinating parallel constructive that Psalmayene 24 makes between a set of creative musicians in the beginning of the piece, and the subsequent three characters along Zomo’s journey.  The African dancer, European musician and Native American conjurer who appear at the top of the show double back at the end – are they represented by the three journey characters?  Zomo acknowledges them knowingly in a wise “a-ha” sort of way, when they reappear at the end, and while it felt organic and natural, and provided a neat closure, the actual relationship and connection were lost on me, as it would probably be for a typical four year old.  Just a little bit more explanation might help connect the dots–it’s quite a wonderful concept just begging to be explored.

If you don’t have kiddies naturally underfoot or close enough to borrow for a matinee, don’t deny yourself a categorically good time – just get up, hip hop if necessary, and see this ageless story and its fun filled characters.  The insightful messages about friendship and living a purpose-filled life are for the young and old, especially when presented with soulful imaginative flair from Zomo.

Imagination Stage suggests Zomo is suitable for ages 4 and up.

Running Time: 1:10, with one intermission