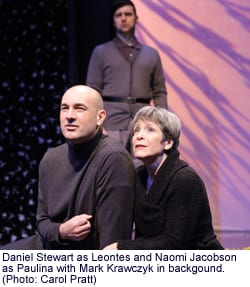 Can Blake Robison, with imaginative staging and a vigorous and powerful cast, breathe sweetness and life into this tired old warhorse of a play? Hah! You might as well ask whether Mike Tomlin can use the old-school virtues of a fierce defense and a low-risk offense to win yet another Super Bowl for the Pittsburgh Steelers. Of course he can! And he does!

Shakespeare was notorious for appropriating other writers’ plots, but by the time he came to write The Winter’s Tale he was pretty much stealing from himself. This is a story about the Sicilian King Leontes (Daniel Stewart) who, against all reason and evidence, believes that the child resting in the womb of his wife Hermione (Connan Morrissey) was begot not by him but by his best friend King Polixenes of Bohemia (David Whalen). He banishes the child, once born, into the wilderness (hence her name, “Perdita”, meaning lost); later, we see him weeping over the lifeless body of his wife. It is also the story Perdita (Laura C. Harris), a generation later, now a shepherd girl and the beloved but secret fiancé of Florizell (Dan Crane) – who is none other than the son of this selfsame King Polixenes. When Polixenes finds that his son plans to marry beneath his station, he creates a whirlwind of rage which blows the couple all the way to Sicily, where they seek the protection of King Leontes. It is also the story of Polixenes’ clever servant Camillo (Frank X) and Leontes’ even more clever servant Paulina (Naomi Jacobson), who move their masters to the best virtues – love and humility – in the face of overweening stubbornness and pride.

This play offers a lot of challenges to a director. Leontes’ transformation from Polixenes’ best friend to his imagined cuckold is abrupt. Leontes must argue his accusation not only with Hermione but with an army of retainers (Drew Eshelman, Mark Krawczyk, Jesse Terrill and Lawrence Redmond), led by Camillo; these arguments go on at impressive length, and when they are done Leontes must face off against Paulina, a sharp-tongued midwife. It is unclear how Camillo convinces the young loves to escape to Sicily. Modern audiences must be uncomfortable with the implication that Perdita is an appropriate match for Florizell only because she secretly has royal blood. And The Winter’s Tale is famous for having the single most impossible stage direction in all of Shakespeare, and perhaps all of human history: “Exit Antigonus, chased by a bear.”

Robison surmounts these challenges with the ease of a Santonio Holmes shaking off a defensive back. He frames the play by using a father (Redmond) telling a boy (the charismatic Zophia Pryzby) a story, and later integrating both of them into the plot – a device used with great success by Julie Taymor in her film version of Titus Andronicus. He takes full advantage of James Kronzer’s beautiful set, in which snowflakes are set against what appears to be a clear plexiglass backdrop; when it is backlit it appears that we are in the midst of a silent blizzard.

He decrees that the play be done in modern dress, and he and costume designer Kate Turner-Walker have great fun with it. In Sicily the characters wear the grave pinstripes common to trial lawyers and Mafioso bosses, and in Bohemia they dress as – well, as Bohemians. Shakespeare requires that Polixenes and his son Florizell resemble each other. “Your father’s image is so hit in you,” Leontes tells Florizell, “his very air, that I should call you brother, as I did him…”. In Crane and Whalen, remarkably, Robison has actually found two actors who could pass for father and son. Shakespeare means Perdita’s adoptive family to be rustic clowns; Eschelman and Jon Reynolds are funny, but they are never over the top, and Robison puts much of the comic weight instead on Autolycus (an amusing Anthony Cochrane), a low-grade con man.

Shakespeare has a scene in which two strangers give a third-person account of how Leontes discovered Perdita was his daughter; Robison wisely cuts the scene and has her adoptive father and brother – wearing costumes so loud and full of personality that they will get agents if Turner-Walker doesn’t lock them back into their box – tell the story themselves. And how does Robison handle the stage direction about the bear? I can’t tell you. It’s too cute for words.

But mostly Robison turns to the fundamentals: good pacing, good acting, and absolute commitment to authenticity. Stewart is the son of one of our best Shakespearean actors, and will doubtlessly be compared to him. Such comparisons are unfair, as Daniel Stewart appears to be a completely different type of actor. He does not display Patrick Stewart’s imposing resonance, but instead imbues Leontes with warmth and doubt. He is overbearing and bombastic, confused and insecure – in short, a schmuck like us, too quick to make bad decisions, which we repent at length. He is in a tradition which, in the present day, we see stretched in a line from Ralph Kramden through Archie Bunker to Homer Simpson. Had Robison chosen to put the play in contemporary language as well as contemporary dress, we could imagine this Leontes saying “to the Moon, Hermione!” and later, sitting in her mausoleum, saying, “Hermione, I’m a mope.”

Among the rest of an exceptional cast, two performances stand out. In one of the play’s many improbabilitites, Shakespeare has Polixenes disguise himself to spy on his son Florizell, at play with his love Perdita. Imagine, a father wearing a disguise so good he could fool his own son!  But Whalen pulls it off in a way which makes the dialogue between Florizell and the disguised Polixenes credible, so seamlessly slipping into the persona of an aged stranger that it’s easy to believe that he could fool Florizell into disclosing damning information.

And what can I say about Naomi Jacobson that hasn’t been said before? She ignites the stage every time she steps out upon it. Her Paulina is a tsunami of emotions, some of them conflicting – rage, fear, sorrow, love. You can see her affection for Leontes even as she tears him a new one, and the surprise ending, with its implication of unfathomable sacrifice, is made even more moving by Jacobson’s portrayal of a woman whose unfailing loyalty makes her capable of anything.

But: everyone in this cast is so good, and serves this production so well, that I will break tradition and name them all, even as the Steelers defense should be identified by name at the start of every game: Kirsten Benjamin, Anthony Cochrane, Dan Crane, Saskia de Vries, Drew Eshelman, Laura C. Harris, Naomi Jacobson, Mark Krawczyk, Connan Morrissey, Zophia Pryzby, Lawrence Redmond, Jon Reynolds, Daniel Stewart, Jesse Terrill, David Whalen, and Frank X.