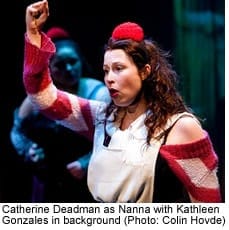 Oh, what an unpleasant task it is to review a play one didn’t enjoy! And how much worse it is when the production is done by an excellent and admirable company, and with such obvious care and effort!  But it is time to face the music. In this production, Catalyst grabs you by the throat and shouts in your ear for two hours and twenty minutes, not including a fifteen-minute intermission. Roundheads and Peakheads? More like Poundheads and Shriekheads.

Let us lay the primary blame where it belongs: at the feet of playwright Bertolt Brecht. Brecht was a theatrical innovator and experimental theorist who ended up inspiring more good plays than he wrote. His principal contributions to the art were his concepts of “epic theater” and of verfremdungseffekt, in which the audience is distanced emotionally from the play’s events. Regrettably, he achieves both in Roundheads and Peakheads, a 43-character play replete with Snidely Whiplash-type villains and heroic workers.

Director Christopher Gallu enhances the audience alienation by putting a sizeable amount of the action at the very back of the Springer Theatre’s enormous stage. Gallu is himself a theatrical innovator of considerable gifts, who had previously created Catalyst’s enormously successful production of The Resistible Rise of Arturo Ui. Here, he does some swell things – a few excellent raps and some interesting video work which solves some of the problems created by the less-than-epic budgets of most modern theaters. But he does not solve the problem of how to make this protracted rant of a play human and accessible.

Brecht’s plot has all the subtlety of the hydrogen bomb. Yahoo faces a crisis: the nation’s poor, led by the noble Sickle League, are in danger of overthrowing the rule of the rich landlords. The “Big Five”, the nation’s behind-the-scenes manipulators, conclude that the incompetent Viceroy (Dan Istrate) must be replaced, at least temporarily, by a political turnaround artist, Governor Iberin (Erica McLaughlin). Iberin’s strategy: to distract the poor from their grievances by inciting them to an internecine war between the Zaks – folks with round heads – and the minority Ziks, who have pointy heads.  It’s pretty one-sided, with the Zaks, aided by the hoodlum Hatsos, pretty much kicking Zik gluteus maximus. If at this point you are seeing the Communist Party, Germany’s wealthy capitalists, Hindenburg, Hitler, Aryans, Jews and Brownshirts, respectively, you are on the right track.

When a peasant farmer (Grady Weatherford) seeks relief from the oppressive rent his landlord (Cesar A. Guadamuz) – who happens to be one of the big five – charges, his cause seems hopeless. But Governor Iberin has a different angle: the landlord, a Zik, admittedly had sex with the Zak farmer’s daughter (Catherine Deadman), who is now a prostitute. Iberin denounces the Zikish landlord for despoiling the Zakish maiden and ruining her life, and sentences him to death. The farmer doesn’t give a hoot about his daughter’s sex life – her career choice seems fine to him – but he likes the death sentence part, and becomes a big fan of the Governor rather than joining his natural allies, the Sickle League.

The remainder of the play is a rambling montage of scenes involving nuns, horses, drunken parties, a virgin offering her body to save her brother (Measure for Measure was the play’s original inspiration), switched identities and, of course, regrets…all involving characters who are on the stage too briefly, and who assume poses too outlandish, for us to care about them.

There are some exceptions. Deadman and Weatherford do fine work, as does Monalisa Arias in a series of small roles. Kathleen Gonzales, who plays the cigar-chomping Boss of the Prostitutes, surprises us by displaying a beautiful soprano voice in the second Act. Andres Talero delivers a moving speech as the head of the Sickle League at the end of the play, although I had difficulty understanding his delivery of Gallu’s rap. John Tweel is John Tweel, which is to say, very good, and Jennifer Crooks was serviceable as a Peakhead nun. Chris Royal provides some good original music for the lyrical sets with which Brecht salts the play.

But much of the play is overstated, overloud, and over-gestured. McLaughlin is particularly annoying as the Governor, where she put the hysterical in histrionics, and even worse as a money-grubbing Mother Superior. But she is far from the only offender. Indeed, the wild-eyed acting is so widespread, and Gallu is such a good director normally, that I am compelled to conclude that the overacting is consistent with Brecht’s intentions. That may explain why the play has been so seldom performed, even in Brecht’s lifetime.

Running Time: 2:20, with one intermission.