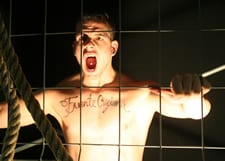 When Lope de Vega launched Fuente Ovejuna (The Sheep Well) in 1614, he meant his play, based on an actual event, to sound a warning. When does political power go over-the-top and become outrageous?  Lope looked back to a turbulent period in 1476 to find the answer. And in so doing created what is now considered a classic with a modern message. In some parts of the world today,  “Fuente Ovejuna lo hizo.” ( “Fuente Ovejuna did it.”) has become a catchphrase for revolution against human rights abuse, as symbolic as a raised fist against a tank in Tiananmen Square.

On the Shakespeare Company’s Lansburgh Theatre stage last Tuesday night, twenty-five public high school students from Madrid, Spain piled on stage, stretched and warmed up on a bare-bones set consisting of blue exercise mats framed by a steel-bar scaffold and chain mail fence. Then this agile-bodied troupe of 15-20 year olds, entitled the Young Company of Theatre of the South, delivered a superb performance of a one-hour, truncated version of Fuente Ovejuna for an eager full-house adult audience. (Admission was free, thanks to The Spanish Embassy and other generous donors.) On Thursday and Friday mornings, at 10:30 a.m., this same troupe of teenagers from all regions in Spain packed up their props and trundled across town (as players did in the 17th century), to repeat their show for a high-voltage audience of Washington area high school students.

Directed by Jose Luis Arellano Garcia, this condensation, accompanied by percussion blocks, rattles and drums, worked well to clarify the basic conflict about how powerful people can mistreat little people. Despite some technical problems with sur-titles at The Lansburgh, thankfully ironed out by the time the play got to GALA’s Tivoli Theatre, Fuente Ovejuna proved to be a pitch-perfect climax for the D.C.’s Lope de Vega Festival, celebrating the Shakespeare of the Golden Age of Spanish Theatre (1570-1680). Lope will be remembered as the playwright who gave us the recently produced The Dog in the Manger, at the Shakespeare Theatre; and The Best Judge, The King, at the GALA. Long live the cross-town collaborations.

The time period is before Columbus set sail in 1492, before the consolidated reign of the Catholic king and queen, Ferdinand and Isabel. Spain is torn by warring fiefdoms, Portugal against unified Castile/Aragon. A town about 55 miles northwest of Cordoba, originally called Abejuna, “well of the bees,” changed its name because of a corrupt ruler. A Commander, a villain, takes over the town, brutally tortures the male peasants and sexually harasses the women. At first the men are like shepherds who let wolves devour their flock of sheep. It takes the brave resistance of the females, who, like the Amazons of ancient times, arm themselves with stones and strident voices, to instigate insurrection.

Here the Young Company, who have been working on this play three-hours a week for about two years, departed from Lope’s original text. Instead of the classical Greek tradition of the messenger reporting all violence off-stage, the “Death to the tyrant” scene and the commander’s dismemberment became a ritualized stabbing on-stage. Backed by the rich imagery retained even in this Cliff Note’s version, the Young Company’s kinetic reenactment communicated the message efficiently and well.

Fernando and Isabel, the popular king of Aragon and queen of Castile, send a judge to torture the townspeople one at a time, to force confessions. When each and every townsperson, small boys and old men alike, give one answer, “Fuente Ovejuna did it,” the future King and Queen of a united Spain, are so deeply moved by the communal resistance,  as are we in the audience, they pardon the crime of retribution as justified. Society tilts back into balance and law and order are restored. Thereafter, Abejuna becomes Fuente Ovejuna, or The Sheep Well (literally in Spanish “Fountain or source of life for Sheep.”).

The poetic strophs and anti-strophs of the torture scenes of individuals were cut to a terse on-stage report, for time value and ultimate effect. Too bad. This critical moment in Lope’s original, where the off-stage cries in an alliteration-and-assonance rhyme scheme in Spanish, supposedly untranslatable into English, lend a lyrical and dignified beauty to a horrific event, is  part of the play’s universality and greatness.

Ironically, the Shakespeare Theatre produced a 2 hours 45 minutes version of Fuente Ovejuna during their 1990-91 season but the play was not well received. Part of the problem was attributed to translation. Graduate students in Comparative Lit take note.

But no complaints. This version from Madrid’s Young Company was thrilling and powerful enough. We got the message. That’s what’s important. The setting for Fuente Ovejuna reminded me of the social injustices addressed in the gang violence play Breath, Boom by Kia Corthron, produced at Studio Theatre in December 2007.  But make no mistake.  Fuente Ovejuna is a masterpiece of dramatic literature with a universal warning to rulers. The unbridled power of one tyrant’s behavior can lead to chaos.

– This brief run, consisting of 4 shows, has closed.

Fuente Ovejuna (The Sheep Well)
By Lope de Vega
Adapted by Mar Zubieta and Francisco Rojas
Directed by Jose Luis Arellano Garcia
Produced by the Young Company of the Theatre of the South (Compania Joven de Teatro del Sur), and staged at The Shakespeare Theatre Company and the GALA Hispanic Theatre at Tivoli Square in Washington D.C.
Reviewed by Rosalind Lacy