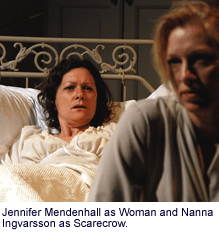 A woman on her deathbed faces the regrets of a half-lived life and her imminent departure from a philandering husband and eight children.  Irish playwright Marina Carr tackles this setup in Solas Nua’s production of Woman and Scarecrow and produces a fierce and funny masterpiece, which also serves as an ideal vehicle for an unforgettable performance by Jennifer Mendenhall.

Mendenhall plays the Woman who struggles with a range of emotions including remorse, bitterness, longing, and grief, all with a brutal frankness and frequent gallows humor (having wasted away from illness she admires her “graveyard chic” in the mirror).  The one emotion her character rarely knew was happiness, a fact pointed out by the mystifying Scarecrow (Nanna Ingvarsson), who at different times seems to be either a drug-induced projection of the Woman’s inner soul or a guardian angel.

The Scarecrow serves alternately as a friend and a taunting prosecutor.  When the Scarecrow accuses the Woman of not eating the world, she admits that she barely tasted it.   Even her eight unseen children were just the result of the Woman’s greed for numbers and an excuse for staying in a loveless marriage.

The banter between Mendenhall and Ingvarsson is both profound and entertaining.  Their conversations range from philosophical musings about the purpose of life to pragmatic black humor about funeral instructions, but always twisting with the frequency of a fun-house thrill ride.  Everytime the Woman wants to digress into romantic reminescences, though, the Scarecrow forces her back to a struggle towards the truth of her life.

Aided by the direction of Des Kennedy, Mendenhall gives a remarkable performance, one of the best of her long and award-winning career.  It is amazing that she can achieve so much energy and emotional power while remaining constantly bedridden on stage.  She handles her dialogue with a combination of convincing candor and biting wit that never lets the situation turn mawkish.

The exchanges between Mendenhall and Ingvarsson are the most intriguing.  Ingvarsson has a nice range and a solid rapport with Mendenhall, although her Scarecrow is a little bland at times.  Mendenhall also spars well with her two other foils, her cheating husband Him (Brian Hemmingsen) and her severe Auntie Ah (Rena Cherry Brown).  Mendenhall denies Hemmingsen the easy forgiveness that he seeks and also refuses Brown’s urgings to repent.  While both characters may be a tad underwritten, Brown wrings some wonderful laughs out of her dead-on delivery of witty rejoinders while also adding some moral weight to the situation.

The tiny Mead Theatre  Lab is a nice space for this intriguing and intimate work, allowing you to focus on Carr’s sharp dialogue and Mendenhall’s unflinchly honest performance.  Most of the play’s messages are conveyed in the first act, so the second act does lose a little momentum before rallying for a powerful ending.  Still, the work is entrancing, if a little long.

Late in the play the Woman realizes the importance of marking those small, passionate moments in our lives.  For me, Solas Nua’s American premiere of Woman and Scarecrow is a one such moment.