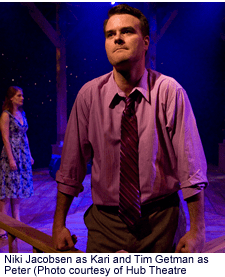 The characters in Craig Wright’s Pavilion reflect the country’s current state of malaise where optimism collides with regret and heartbreak producing flashes of hope and resilience.

Nominated for the Pulitzer, The Pavilion covers a lot of territory in two hours and has an Our Town kind of in-the-moment tone.  The setting is deeply rooted in the Minnesota heartland where the actual pavilion nestled along a lake, has been the meeting spot for generations of young lovers, and is facing bulldozers to make way for new developments, evoking endless metaphors for continuing evolution and change.

A poignant reflection on young love, and living the life you’ve got, the play also presents the most creative, shape shifting, ubiquitous narrative character this side of the galaxy.  The Narrator sets the nostalgic mood at every opportunity and pinpoints the action in terms of intergalactic and interplanetary events.   Jason Lott plays the scene-stealing narrator role, while Tim Getman and Niki Jacobsen portray Peter and Kari, the young star-crossed high school sweethearts who made tough, life altering decisions back then that they’re still trying to come to grips with twenty years later.

They see each other for the first time since those early years having undergone their own mini-evolutions.  “We are all individual universes” the Narrator espouses, and the text explores how we come to terms with our own private stages of evolution, one decision at a time, through painful adjustments, denial, acceptance and quiet resignation.

For Peter and Kari, and their hosts of classmates winningly played by Lott, the reunion zonks them out of their current realities, smacks them with the questions of “why’ and “what if,” then demands answers while the bulldozers rev up engines ready to tear down their precious “cathedral of memories.”

Playwright Wright skillfully balances the emotional terrain with humorous touches, and director Jeremy Skidmore hits all the marks along the way.  This premiere production of the newly constituted Hub Theater reflects on life changing events one action at a time and doesn’t shirk from the tough questions, all within a great scenic design by Robbie Hayes

Director Skidmore has a way with theatrical moments and beats, extracting emotional nuggets like a prospector finding gold in the hills.  In this production, he allows silence to relay the deep subtextual messages between the words, and those quiet passages speak volumes, sometimes to a fault in Act 2,  considering the usual pack-a-punch style for this director, but the moments feel genuine.  Kari’s initial reaction in seeing Peter at the Reunion starts as angry (and loud) disdain and evolves from there.  Hers is more the catalyst role, while Peter, who seems oblivious to the extent of the hurt, brings flowers hoping to make amends and, at one point,  actually tries to finagle a cosmic “do-over” to alter time and space so he might (finally) do the right thing.  Since those kinds of cataclysmic events only happen in sci-fi dreams, the couple has to face their shortcomings the old fashioned way, with honest and heartfelt communication.

Jacobsen has the harder task where for the entire first act, Kari is almost hysterically hurt –just seeing Peter throws her into conniptions.  It’s a challenging balancing act, and Jacobsen successfully relays years of hidden normally quiet devastation without sounding like a seething and hurt shrew, especially considering she has to utter such lines as “You ruined the universe,” to end the first act. Kari’s inner strength shines through and redeems her  — her final moments of acceptance are priceless and genuinely felt. Tim Getman’s Peter is a gentle “Everyman” who is finally facing the impact of his early actions.  Getman is also a talented acoustical guitar player and singer which comes in handy for the touching piece he performs as the last surviving member of a 4-piece combo.   Plus, there’s Lott, again, as the rest of the class of 1989, whose facial expressions, vocalizations, and split second maneuverings portraying the assortment of quirky characters are truly noteworthy.

Wright’s messages include the relentless forward unilateral movement of time as well as the constantly changing landscape of our modern world.  He captures the haunting sadness of going through the motions of life, where many of us reside, instead of truly living with gusto. Wright’s zany take on life and living are evident in the series he created “Dirty Sexy Money” and his episodes of “”Brothers & Sisters,” “Lost” and “Six Feet Under.” To see his theatrical work in the hands of one of the most talented directors in the metro area, done by a promising new company in a brand new theater is enough to warrant a trip to McLean, and hope for many more return trips.