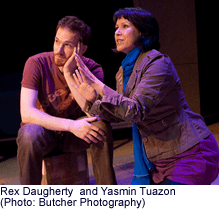 Why do we tell stories? Scheherazade (played by Yasmin Tuazon in Jason Grote’s exquisitely reimagined, recontextualized retelling of the story of 1001 Nights) gave the first unambiguous answer: we tell stories to keep from dying. She means this literally: Shahriyar, the Lunatic King (Rex Daugherty), has made it his practice to marry a maiden every day,  deflower her at night and behead her the next morning, all the better to remove any temptation to further sin. When it is Scheherazade’s turn to wed, bed and die, she devises a desperate stratagem: to tell him a story each night, and leave off just short of the climax, so that the King’s curiosity overwhelms his murderous self-righteousness, and he is compelled to keep her alive so that he can hear the end of the story. As you can imagine, there is no end – not until her safety is assured.

So what stories does she weave, to put off the endless no? Careful to assure the King that her stories are true – if not yet true, then true in the future – Scheherazade tells the story of a mad prince (Jay Saunders) who enrages his father (Dylan Myers) with his lustful passion for his own lisping sister (Abby Wood). And the story of the young Arab student (Tuazon) who confronts Alan Dershowitz (Lee Leibeskind) at Columbia University. And the story about the time Gustave Flaubert (Saunders) sought pure love with a prostitute (Wood). And the horror show on TV, hosted by Osama bin Laden (a very amusing Myers). And the time that Sinbad the Sailor (Lee Liebeskind) washed ashore, scimitar in hand, to meet the great writer Jorge Luis Borges (Myers), blind and, um, dead, who tells him the story of the library as big as the Universe, which has in it every word ever uttered in a human language. 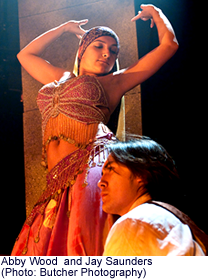 Good storytelling is a sort of fearless magic act, in which events move too quickly to tolerate objection. This is certainly how Scheherazade treats her murderous husband, telling her stories with confidence and at the speed of life, heedless of her impending doom.  And this is the way that director Randy Baker and the rest of the Rorschach troupe tell this story: with such assurance and commitment that the impossible seems true – here is a magic lamp! And a djin (Liebeskind)! And a young Arab woman (Tuazon) in love with a young Jewish man (Daugherty)! Baker has induced excellent performances from his actors – this is the best I have ever seen Wood – and Tuazon and Daugherty are absolutely riveting. Though the stage must serve as a palace room it is uncluttered enough for Daugherty to deliver several lines sotto voce, as his character requires (David C. Ghatan did the scenic design). Throughout, 1001 is a feast of risky things, done well.

It cannot escape our attention that Rorschach, like Scheherazade, faces an uncertain fate. Without a theater space of its own, this brilliant company is obliged to compress its season into a summer, when Georgetown University’s beautiful stages are made available. That they take on a difficult piece from a playwright whose great gifts have not been fully recognized by the theatergoing public while the very company is at risk means that they have learned Scheherazade’s lesson: survival requires boldness, especially during perilous times.

Or: how about this story? A young Arab student (Tuazon), fresh from her confrontation with Alan Dershowitz (Liebeskind – he doesn’t let her get a word in edgewise), falls in love with a young Jewish man (Daugherty). She is not certain whether she is moved by true love, or by a desire to shock her parents in Kuwait, or by a longing for the exotic, but who among us knows these things? When she leaves him, we discover that his love for her is so powerful that even with the world crashing around him, he would rather have her than return to safety. She does come back, to listen to his silences, which are as powerful to her as a whole universe of words. That’s love. That’s storytelling.

Note:  Hunter Styles, who has written for this publication and will do so again this summer, served as this production’s Assistant Director. This has not affected the objectivity of my review.