Our 20 Fringe writers are reporting in daily with fresh reviews. 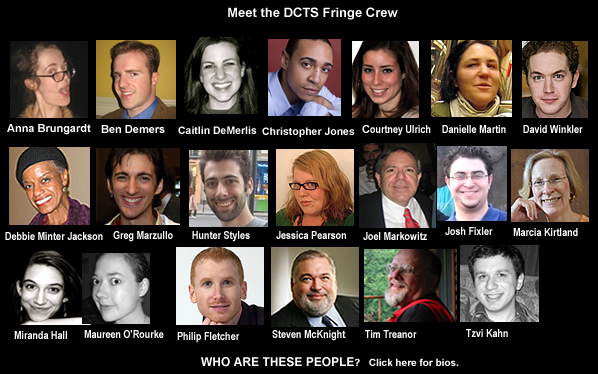 What did they like? Watch this page for their reviews (the links will appear below as soon

All That Was Left of Them

Born of a Fairytale

Cover Me In Humanness

Dancing to Ancient Rhythms (No review. Our sincere apologies.)

Deconstructing the Myth of the Booty

Four Dogs and a Bone

Headscarf and the Angry Bitch

Hello! My Name Is Jonah

Herbie: Poet of the Wild West

How to Eat an Elephant

Immoral Combat, a satire on the news business

Is There Anybody Out There?

It’s Not Easy Being Green

Leave A Tone After The Message!!!

Life in Death: an Opera Electronica

Life Inside an Open Kaije

Lila: The Love Story of Radha and Krishna

Not Your Granny’s Revolution

Self-Service (No review. Our sincere apologies.)

Sex, Dreams and Self Control

She Moved Through the Fair

So Do You Love Me Yet?

The A Cappella Party

The Attack of The Big Angry Booty

The Elephant Man – The Musical

The Escapades of Farty Johnson

The Fall of the House of Usher

The Girl Who Waters the Basil

The Honest-to-God True Story of the Atheist

The Lion, the Witch and the Wardrobe

The Lost Ones by Samuel Beckett

The Pirates of Penzance

The Quick Brown Fox Jumped Over the Lazy Dogs

The Real Adventures of Tom Mix

The Rise of General Arthur

The Teacher’s Lounge or One Child Left Behind

The Tempest: A Musical

The Terrorism of Everyday Life

They Call Me Mister Fry

This Is NOT My Life

Thou Shalt Not Kill: A Collection of One Acts

Waiting for the Trigger