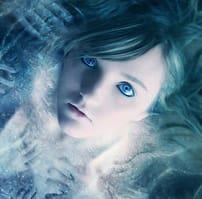 The death of a beautiful woman and the ensuing madness of her lover is perfect subject matter for a Sunday afternoon at the theater. Nicholas Allen and John Milosich creatively and beautifully adapt “Annabel Lee”, originally penned by Edgar Allan Poe, to create an evocative ensemble-based movement piece. Old Lore Theater manages to effectively embody the chilling nineteenth-century tale while still entertaining modern audiences by bringing new questions to the relationship of lovers torn apart.

Considered a childish tale of longing, the company introduces more adult themes into the poem, including the idea of the breakdown of language and movement, allowing the ensemble to break out of the text and ask “what’s her name again? That’s not right” driving the audience towards its frenetic climax, a man driven crazy with obsession. The dancers build the story like a sandcastle with childlike creativity, simultaneously pulsing and writhing with a highly charged sexual energy. The effect is haunting. But with three of the performers Synetic company members, one would expect nothing less.

The Apothecary is a perfect space for this piece, with pews as seats and exposed brick and rafters. The ensemble while moving together to fill the space as the sea or wind is a powerful force, but when moving singularly, the weaknesses of the performance and indeed performers are exposed. At times some of the choreography seems clumsy and underworke.  But the musical moments shine, when members of the cast pick up a guitar and violin to accompany the ethereal song.

The ensemble successfully portrays the horribly painful emotions associated with loss and heartbreak, their tearing, ripping motions grasping at the hearts of the audience, keeping many of us on the edge of our pews. It was a beautiful piece and any fan of Poe and physical theater should attend.