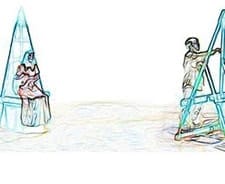 A fantastic gem embedded within the Fringe schedule, Life in Death: An Opera Electronica absolutely nails the difficult challenge of producing a marquee-quality opera, complete with talented performers and a polished, symphonic score within the often bruising parameters imposed by the festival format. This haunting production relates the sad tale of a painter who, determined to render his young wife’s beauty in the perfect portrait, becomes increasingly entranced with the girl in the canvas while growing increasingly distant from his real bride.

This exquisite little show is blessed with superb music, voices, and graceful dance. Gregg Martin’s beautiful score and lyrics allow the performers to shine in small, meticulously sculpted moments of joy and sorrow, charting the painter’s relationship with his bride from their happy day of marriage through the slow decay of their bond as his painting fixation grows.

The four performers call upon their considerable theatrical and musical experience to raise a moving drama upon the sparse stage. Ted Czyzewski, who has performed previously at the Kennedy Center, showcases a powerful baritone in his eerie, obsessed odes to his bride’s painted image. Bridgid Eversole, praised highly as a soloist by the Washington Post, uses her gorgeous soprano to lend a heartbreaking character to the role of Emily, the dutiful bride with a tragic fate. James Rogers, also hailed for his superb lyricism by the Washington Post, uses his resonant baritone to imbue his dual role as Emily’s father/the Narrator with both warm, paternal love and the dire urgency of one who knows of oncoming doom. Finally, as young Emily, Mary Werntz whirls her lithe form gracefully about the stage, weaving a dangerous spell over both the Painter and the audience.

A live percussionist and violinist back the soloists, leaving the rest of the accompaniment to prerecorded synthesized instrumentals. These recordings do a surprisingly good job of recreating the feel of an entire pit orchestra, and the electronic tinge does not diminish the inventiveness and sophistication of the music. With deft, minimalist design choices, the production team creates mesmerizing dream sequences, happy afternoons, and moments of creeping dread with just a few colored lights and blood red set pieces.

I highly recommend this show even if you are not a big fan of opera. The chance to see performers of this caliber work magic in such an intimate space is just too good to pass up. I guarantee the final images and notes of the show will haunt you well after you leave the theater.

Life in Death: An Opera Electronica

Ben Demersis a longtime DCTS writer and board member, lifelong theater enthusiast, and sometime performer. Since 2009, he's covered a wide range of wonderful theater productions across DC, MD, and VA, developing a particular soft spot for small, quirky productions. When not writing about theater, he works as a digital marketing professional and enjoys exploring DC's cultural and restaurant scene with family and friends.