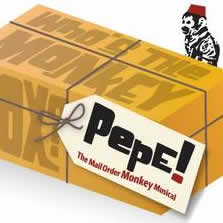 Ok. I say this as big fan of musical theater, but musicals are silly. The whole convention of singing when you should be talking is sublimely odd. It is a peculiar form, but wonderfully so. So it’s great to see a musical that really owns its silliness; one that puts its quirk out into the open for us to admire. Pepe: the Mail Order Monkey Musical is intentionally, playfully odd. It tells the true (though I suspect embellished story) of boys who see an ad in a comic book for a live monkey and decide to place an order, without their parents’ permission. It is the classic tale of the clash between simians and suburbia. It is about having hopes and dreams, and then having poo flung at them. Now can’t we all relate to that?

The play is not without its problems. While half of the main family, mother Suzie Mellring and young son Cyle Durkee are wonderful, the other half, father John C. Bailey and son John Moriatry, leave quite a bit to be desired, both in terms of singing and acting. The chorus of “Bridge Ladies” was often out of tune, and it was a full 20 minutes in before the play really started getting funny. But this is all made up for by a wonderful number by the monkey, amusingly played by Rick Hammerly, and the climax number featuring the entire ensemble.

The music is pleasant, though a little bit repetitive, but the few gems hidden throughout do sparkle. All told, Pepe’s silliness is its strength, and it may be mindless, but it sure is fun.

Josh writes a blog about inexpensive DC arts and culture: www.districtbeat.com. Check it out.