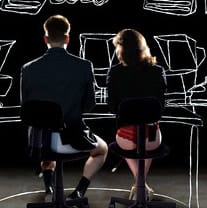 Aliens have invaded the District of Columbia and are proceeding to fatten up humans for use as bio-fuel. Meanwhile, a new childcare trend finds parents locking their children in cars and denying them pizza as a form of discipline. This fad was initiated by Barack and Michelle Obama. Oh, and also, local scientists have developed corpse reanimation technology and used it to bring Ronald Reagan back from the dead.

You know. A slow news day.

Or rather, Slow News Day, an improv show created by 4&9 Productions. Here’s how the interactive show works: audience members are presented upon arrival with pens and cards that solicit their suggestions for headline news stories, editorial topics, and products to be advertised in the commercial breaks. The energetic and talented cast of the show then takes these suggestions, one by one, and uses them to create a full network news program, complete with the aforementioned commercials. (These are performed by the members of TV-MA-a local comedy troupe composed of Ashley Whitehurst, Katie Dufresne, and J.W. Crump-who also turn out very funny performances as the studio interns.)

We also see a number of off-air moments, where the anchors, other reporters, producer, and interns improvise characters and interactions that are by turns amusing, pathetic, and deeply unsettling. (In a good way.)

By and large, the cast members are confident, game, and able to roll with the proverbial punches. Of particular note are anchor Ryan Gillis, and Seaton Smith, who provides on-air editorials. In the performance that I saw, all of Smith’s editorials eventually devolved into tirades or emotional breakdowns about the character’s impending breakup, which would have inspired pity if they hadn’t cracked me up so damn much.

Like any improv, some conceits are better than others, and there was a tendency to run with the bad ones for a bit longer than they deserved. And the show itself, like some of the bits in it, goes on longer than it needs to. But as with everything else, this no doubt varies from performance to performance.

Director Pamela Nash has assembled a gifted crew of improvisers here, and seeing them riff on audience suggestions is a distinct, if occasionally uneven, pleasure.