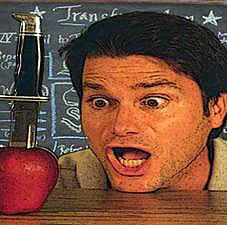 If you could conjure up someone who could get across the magic, frustration, horror and satisfaction of teaching in the California public school system, out would pop Jack Freiberger, mercifully shortened to Mister Frey. Filled with enough impersonations of characters to fill a school yard and the principal’s office, this production has enough heart, audacity, and originality to stand out from the crowd, mainly because of the artistry of Jack Fry.

Fry sets up the premise by describing the pristine, supply filled, white-bread school of his dreams. Just when he had a teaching position within his grasp, it was snatched away from him, and instead he was offered a job in South Central, where the cultural divide hit hard within minutes of his arrival. Talk about a fish out of water. His alter ego, King Arthur, who he could evoke in the suburban white schools, meant next to nothing to kids hardened by their own versions of fire breathing street dragons and real life battles. With enough twitches and expressions to fill a Woody Allen movie, physical stances, and voice inflections, Fry portrays several students, their parents, his tough as nails no nonsense principal, even his fiance, who didn’t make it through his transition from suburbia to the hood. Through them all, Fry shines and cajoles his way to reach and understand the students, accepting them on their terms and convincing them to want to achieve.

Far from Blackboard Jungle and Mean Streets and all the tough kid tales in between, this story works because in addition to the characterizations being so realistic, the people actually exist. From tough guy Anthony and his father-figure Uncle, to jumpy, jittery Jasmine who desperately seeks her Mom’s attention, Fry has their mannerisms down cold in moments and scenes that are heartbreakingly real and honest. His interjections of humor are not forced but are as much part of the message as the family pictures he projects on the screen of the true to life characters.

Fry also relays the frustration of dealing with the sometimes tyrannical rules and regulations of the public school system. He does this strange shadow dance in trying to break up a fight without touching anybody. When officials visit to examine the school’s adherence to the “No Child Left Behind” lock-step policies, he announces them with musical refrains from the Star Wars battling battalions. Finally, with sophisticated audiovisual and light cues, balloon props, hushed tones for somber moods, and shoot from the heart delivery, Fry offers a completely original approach to slipping into the minds and hearts of middle schoolers on the brink of self-discovery, empowerment and personal freedom.

They Call Me Mister Frey is a fresh new take on an ongoing challenge that isn’t going away any time soon – what does it take to keep young idealistic teachers in the classroom where they’re most needed before they get as burned out as crispy critters? Against all the odds, Fry is still in South Central, and we’re thrilled that he’s using some of his precious summer break to share his inspiring observations with us.

They Call Me Mister Fry