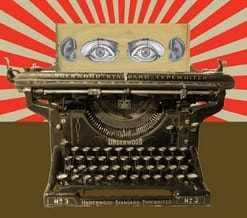 What do you get when you combine a talented group of actors, hermeneutics, diagrammed sentences, and thought-provoking deconstructionist dialogue? Aside from an entertaining and smart fifty minutes of theatre, you get a piece that actually delivers what it promises — an exploration of the individual’s relationship with language, and all the semantics, miscommunication, and mistakes that can be made along the way.

The Quick Brown Fox Jumped Over the Lazy Dogs is divided into thirteen scenes, each exploring certain aspects of its title: inflection, copyright, definition, disclaimer, translations, errata, grammar, interpretation, message, semiotics, afterward, linguistics, and epilogue.  These succinct titles outline the structure of the play; what keeps this from being droll, and believe you me, I can understand if someone had a few…reservations about being entertained by a scene called “grammar”, is the happy combination of the script’s genuine wit and intelligence coupled with the dynamic performances of the actors and fantastic direction. Director Kerri Rambow has taken a challenging script that others may have over-intellectualized, or found themselves caught up in the heady flow of its writing style, and breathed humor into it at every turn. The play begins with Stage Directions (Carlos Bustamente) amicably reading the stage directions, and from there on out the meta-tone of the piece is established, along with the quirky humor that is omnipresent throughout.

One of the highlights of the show was when, with the help of a graph (and honestly, who doesn’t enjoy a good projection of a flow chart or diagrammed sentences? If such a person exists, I sure as shoots don’t want to meet them…), the actors outlined “change,” and the multi-step approach to how one deals with change. Sardonic and hilarious, exchanges such as these offered not only entertainment, as they were genuinely funny in their own right, but incite and commentary on many issues that we, as a nation struggling with socialization reform and economic crisis, face.

The acting was phenomenal and cohesive; there was a palpable camaraderie from the actors that created a wonderful dynamic on stage. That plus their talent was enough to leave even the most grammarian-incredulous audience member entertained. Quick Brown Fox… was smart, funny, and edgy–truly a delight.

The Quick Brown Fox Jumped Over the Lazy Dogs