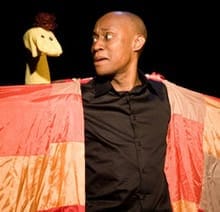 It is difficult to tell what to make of this odd production, a narrative constantly at war with itself. It is the product of a promising playwright, Dan Trujillo (Conference With the Bull; Talk of the Walk-Up) and excellent actors, but it subverts itself at every opportunity. Think of Beverly Sills singing an aria while having ice water poured over her head; think of Vladimir Klitchko boxing while dribbling a basketball; or better, remember the old John Barth novel, “The Floating Opera”, which had characters stand on a riverbank while a paddleboat in which an opera is being performed goes up and down the river, and you will have The Honest-to-God True Story of the Atheist.

The play begins with Daryl (Daryl Lathon) attempting to sell ViagraTM out of a suitcase to the audience. Two obvious shills, Jen (Jennifer Gordon Thomas) and Abe (Abe Goldfarb), after a great show of reluctance, agree to try the magic substance. While they wait for it to kick in, Daryl purports to begin the play. However, the scheduled actors are too depressed  to perform, and so Jen and Abe are drafted in their place. They proceed to act out the honest-to-God true, but highly implausible, story of the atheist (Goldfarb), who in a direct challenge to the Christian God, resolves to kidnap a statue of the Baby Jesus out of an airport crèche. Thereafter, along with his co-conspirators, Tenured Professor (Thomas) and Rich Businessman (Lathon), he will do horrible depredations to it.

As difficult as it is to buy into this story, and the subsequent narrative (involving raccoons invading a classroom and the like), Trujillo makes it yet more difficult by constantly bringing us out of the fictive dream. The actors move from first-person theater to third-person commentary seemingly at random; they sing a (very funny) “Agnostic’s grace” (“Oh Lord, or Whoever/We thank You for the bounty of our feast/Whether or not You in fact actually grew it…”); the use of a prop gets screwed up; they speak in tongues (it is a tribute to the actors that not only do they speak in nonsense words, they speak in the precise nonsense words given to them in the script [there was a copy in the press package]); and so on.

About forty minutes into all this, a play breaks out. A damn good play, involving a horrible truth about the crèche Jesus, and implying that God is active in the world in a manner much more pointed than the atheist imagined. The riveting narrative reaches a compelling crescendo without interruption until the final moment, when Trujillo once again subverts his play, this time for good.

Look, sometimes tired old forms need to be shaken up. Urinetown, which established itself during a Fringe festival a few years ago, was a pointed challenge to and deconstruction of the conventional musical. And during the sixties, the killer B’s – Barth, Richard Brautigan, and Don Barthelme – took aim on the novel and short story, and exposed the creakier conventions. But Atheist seems like an attack on story itself – and, frankly, we live on story, as we live on food and water. From our very first days, we flock to story in order to know the difference between good and evil, and to learn how we can be heroes. We use them to learn that life is complex and ambiguous. We need them to understand that the dilemmas we face are not unique to ourselves, but common to all humanity. To have a story constantly subverted, as it is, is like having a great feast laid out before us, and then having it periodically squirted with WD-40.

Trujillo’s point may be that our lives are not coherent narratives, with purposes and conclusions, but instead a series of random events, and that efforts to suggest otherwise (i.e., most of our art) are a fool’s game. Certainly Daryl’s last speech suggests as much. If so, I respectfully suggest that he is mistaken. It is our jobs to decide our own stories, and impose them on the resisting world, and in so doing, make the incoherent coherent.

The Honest-to-God True Story of the Atheist