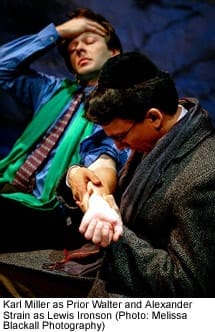 Those who hold that Angels in America is merely a political play – an extended skewer of the Reagan Administration – are mistaken. It is made of sturdier stuff. Two years from now, no one will stage Son of a Bush, or even remember it, but Angels in America will still be important when the details of the 1980s become indistinct.

It is not even a play about AIDS, although that malevolent disease provides the context in which Tony Kushner drives home his truths. On the blessed day when we shut down HIV for good, Angels in America will still be relevant, as it will be for the foreseeable future, and the unforeseeable future as well.

And when it is produced as superbly as Forum Theatre has produced Part I, using some of the best actors in Washington, it will be beautiful as well.

Kushner’s story, played out in eight epic Acts and an epilogue, is a drama of love and compassion in the face of death. In Part I of that story, now being produced by Forum at Round House’s Silver Spring stage, the subject is the debt which the living owe the sick and dying, and the debt of honesty which every person owes himself.

It is the story of Louis Ironson (Alexander Strain), a young man whose lover, Prior Walter (Karl Miller, brilliant in this) is dying of AIDS. It is also the story of the fearsome Roy Cohn (Jim Jorgensen), the tyrannosaurus rex of influence-peddling lawyers, who is also dying of AIDS. It is the story of Joe Pitt (Daniel Eichner, better than I have ever seen him), an almost painfully moral young man who Cohn is moved to corrupt as the salmon is moved to swim upstream, and of Joe’s deeply disturbed young wife Harper (Casie Platt). It is the story of Joe’s secret – the one he dares not tell himself. It is a story of love not strong enough to look Kaposi’s sarcoma full in the face. It is a story of being human, which is to say a story about failure. It is a story about angels.

The Confessions of St. Augustine begins with Augustine stealing an apple from a neighbor’s orchard, and so Angels begins with the confession of an ordinary sin: Louis did not visit his grandmother at the nursing home, where she shrunk up in silence and eventually died.  The failure of Louis to love his grandmother is, through an extension made clear by the Rabbi (Jennifer Mendenhall), a failure to love his history. It presages his much greater failure to love Prior in his hour of need, which is also necessarily Louis’ failure to love his own present life. And although Louis does not bring himself to admit it, it comes about because Prior, stricken, is unbearable for him to watch. His own verdict on himself is that his love is full of ambivalence.

Roy Cohn, on the other hand, is one of the least ambivalent figures ever on the modern stage. Cohn, of course, was a real person – a lawyer so carnivorous that some of his colleagues could not pronounce his name without stuttering.  Jorgensen, correctly, plays him as a man suffused with anger – essentially a human middle-finger salute thrust into the face of God. He is happiest in the middle of chaos, as he is in his office near the play’s opening, juggling a dozen phone calls from enraged clients, terrified underlings, powerful out-of-town connections who want tickets to Broadway shows, and amiable judges. He played principal roles in some of the most outrageous dramas on American political life – Assistant U.S. Attorney involved in the prosecution of Julius and Ethel Rosenberg; chief counsel to Sen. Joe McCarthy, and, later, in his own repertoire of scandals. (At the peak of his earning power, he sent all of his bills out in the name of his corporation, and paid himself $10,000 per year – which was all he reported to the IRS). Anthony Powell once called Napoleon “a machine on top of an animal” and Kushner’s Cohn is every bit of that here, as efficient as a virus in achieving his needs. His immediate need is to get Joe, a fine lawyer and a good man, to take a job in the Reagan-Meese Department of Justice. There, we later learn, he will call on Joe to apply pressure on members of the Ethics Committee of the New York Bar, who are considering disciplining Cohn for embezzlement of a client’s funds. 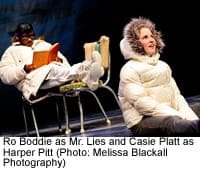 Joe’s immediate dilemma, though, is that he cannot bring his mentally ill wife to leave New York to go to Washington with him. Indeed, he can barely get her to leave the apartment. Harper suffers from delusions that a malevolent man is under her bed, and also that a travel agent (Ro Boddie, amusing in this and other roles) will arrange for her to travel to Antarctica, where she will inspect the hole on the ozone layer personally. None of her delusions, however, approach the scope or importance of Joe’s greatest delusion: that he is a heterosexual. Joe, fortified by his Mormon faith, identifies his homosexual yearnings as a sin, and struggles against them as he might struggle against urges toward drug addiction or homicide. In so doing, though, he sins twice: by failing to love himself, and by failing to provide Harper with the deeply sexual love which is the birthright of any marriage. (We see it before they do: he calls his young wife “buddy” and comforts her with “buddy kisses.”)

Kushner’s subtle and complex art can be adequately performed only by the best actors doing their best work, and we get it here. Jorgensen, an actor who profoundly understands the manic joy and energy of evil, is at every instant Roy Cohn, a man who was at every instant himself. Like Heath Ledger playing The Joker, Jorgensen shows us that evil is implacable because it is fearless, and even as the clock runs out and Ethel Rosenberg herself (Mendenhall) comes to prepare his passage to the Next Place, Cohn responds with a sneer of contempt. In his last local performance, Jorgensen played Satan in Forum’s Last Days of Judas Iscariot. His Roy Cohn is more frightening.

Platt, an actor whose signature character, Trixie Tickles, is a child with an alarmingly adult perspective, brilliantly inverts her to play Harper, an adult with an alarmingly childish perspective. Harper is pathologically needy and whiny but because of the way Platt plays her, we love her anyway. Indeed, it is when Harper is most happy (as when she believes that she has finally made it to Antarctica) that we fear for her the most.

I cannot say enough about Miller. He has discovered the heroism Kushner wrote into the role of Prior Walter, whose function in this play is, basically, to die of a horrible disease. Prior is a gay man who is completely out of the closet, unafraid to cuddle with his lover or to sashay around his room in an impressive red dress. Another way to say this is that he loves himself, which is a defense against death. Like Cohn, he is at every moment himself. Although he is terrified of what is to come, he faces it with a steely gaze and jutted jaw – “like a man,” as we might have said back in the day.  Miller hits all his grace notes, and makes him funny in surprising ways. As his time approaches, Prior (whose separation from his immediate past is made apparent by his absent mother) is joined bedside by distinguished ancestors from the Restoration (Jorgensen) and medieval times (Eichner) – the “prior Priors”, as Prior observes. They remind us that Prior can trace his ancestry to the Norman Conquest, and that the first Prior Walter was immortalized in the Bayeux Tapestry…suggesting that homosexuality has been part of the tapestry of life since antiquity. (William the Conqueror’s oldest son, King William II Rufus, was almost certainly gay.) Miller’s Prior, frightened, alert, enraged by his early dying but capable of laughter, gives a new meaning to the term “death with dignity.”

Strain has a much more difficult task in making Louis Ironson palatable to us despite his despicable abandonment of his beloved. But it is his character, along with Joe Pitt, who carries the dramatic weight of this play, for in their confusion and weakness they are most like us. Strain’s choice to play him as a jittery pedant is a plausible one, and consistent with the text. His delivery of the lengthy monologues Kushner has written for him is both inventive and appropriate. When Louis is meant to be profound, as in a Millsian meditation on justice which he delivers to Prior, Strain makes him profound. When he is meant to be ridiculous, as when he delivers an extended rant on racism to a bored African-American friend (Boddie) while desperately trying to be politically correct (at one point he refers to “Dutchmen” and corrects himself: “Dutch men and women.”), Strain makes him ridiculous. But it is significant that even as Louis blathers Kushner has him pronounce an important theme: that America, in its triumphalism, has cut itself from its spiritual roots. (“There are no more angels in America,” he says.)

In singling out these performances I do not mean to overlook Nanna Ingvarsson, who is spot-on in three smaller but important roles, or Jennifer Mendenhall, who is, well, Jennifer Mendenhall, absolutely comfortable and convincing as a Rabbi, as a Doctor, as a mother – as anything, really. Her time will come in Part II.

Nor can I ignore the perfect support from an all-star technical team, Set Designer Tony Cisek, Lighting Designer Colin K. Bills, and Sound Designer Matt Neilson. They opt for an inconspicuous simplicity, a choice which best serves the production and Kushner’s objectives. But when they have to remind us that we are between heaven and earth – as when the Angel (Ingvarsson) appears – they are able to do it with flair and dispatch.

When actors – even actors as powerful and professional as these – achieve such heights justice requires that we credit the director. Jeremy Skidmore has achieved many things during his tenure as a director and theater thought leader in Washington, but if he is remembered for nothing other than what he has done with this play, it will be a happy and revered memory indeed.

But the best thing I, or anyone, can say about this astounding and beautiful production, is that it appropriately serves this astounding and beautiful play, one of the five best American plays of the last century. From oncology to ontology, Kushner gets everything right. He makes inspired, imaginative choices and relentlessly rejects clichés, blame-casting and false simplifications, and so reminds us, as Shakespeare once did, that in action, including even our sins, we are very much like angels. To find out what else we are, stay tuned for Part II.