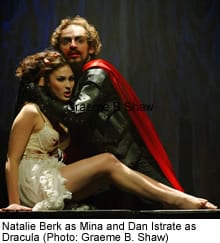 From our carefree seasonal contact with the Dracula character, we’re accustomed to the image of the withering Lugosi-type, the one who steps somberly into doorways at Halloween parties and makes googly eyes at the ladies. But in Bram Stoker’s original novel, the Count was a more simmering, bestial menace. He turned to vapor at will, prowled the hills in the form of a wolf, and even controlled the weather.

Given director Paata Tsikurishvili’s impassioned command of his casts and audiences, it seems possible that the freezing rain over Rosslyn on Friday was Synetic Theater’s own concoction, designed to draw the weary and waterlogged into a warm auditorium for an evening with the devil.

Synetic’s Dracula is back after four years lying dormant, this time starring Dan Istrate instead of Tsikurishvili himself. Like many Synetic shows, Dracula mines the fertile overlap of sexuality and violence, and this re-mounting delivers potent rushes of both.

Popular thinking merges Stoker’s fictional villain with the all-too-real Vlad the Impaler, a 15th-century Romanian warlord, and from this genesis, the company leaps headlong into a thrilling opening war sequence. Fighting with hands, feet, and some really sharp spears, our Dracula-to-be fends off a claustrophobic surge of warriors, who seethe relentlessly all around him. Although he gets his punches in, Vlad ultimately receives a taste of his own medieval medicine (ouch, those pointy sticks!) and, in a wordless encounter with a faceless spirit, gives up his body to demonic possession so that he may go on walking and talking.

Centuries pass. In wanders the English lawyer Jonathan Harker (Alex Mills), who is traveling to Castle Dracula on real estate business. The gruff local villagers think he’s crazy to head up the hill – and the rumbling, Slavic accents they lather on certainly give off a foreboding vibe – but the naïve Harker ventures forth.

He quickly regrets his visit, which sets off a chain of escapes, attacks, and retributions among Count Dracula, Harker, and his beloved Mina (Natalie Berk). They call on Dr. Van Helsing, a veteran of the occult (played on Friday by Roger Payano), who knows to pack his bag with wooden stakes and a few bottles of holy water. Actors Ben Russo, Philip Fletcher and Ryan Sellers comprise a motley crew of gentleman suitors, who buffer the vampire slayer and try their best from scene to scene to keep the bite marks off the women.

This Dracula boasts new choreography, casting, and design since the acclaimed run of its 2005 version, which also premiered close to Halloween. Synetic has a good eye for seasonal pleasures, and the growing chill in DC fits the company’s slide into the realm of nightmares.

The timing is so overtly communicated that it’s a wonder Synetic’s not getting trick-or-treaters at their front doors. The ever-humming fog machine is one of the hardest working players in the show, thickening the dimly lit space and obscuring dark corners. The stage is braced by a huge, crouching spider, with glowing red eyes and big bristling stalks for legs. The backdrop is all cobweb, hanging heavy in tattered layers. Right about here is where Dracula nudges the borders of camp, and, at times, strides wholeheartedly into a reliance on the spooky physical gestures and canned accents that are as familiar to us as candy corn.

The camp factor is compounded by Nathan Weinberger’s script, which hits the basic plot points but mostly opts for slack cliché over fresh wit. When Harker offers a nightcap, Dracula narrows his eyes. “I don’t drink… wine…” he murmurs. Oof. Irakli Kavsadze, as the tortured lunatic Renfield, has the most success with the harebrained dialogue, but I wouldn’t wish it on anyone, especially a group of actors that reach so high and, throughout, hit their marks.

After such innovative projects as their silent Shakespeare shows, one wonders how Synetic’s Dracula would play without speech. My guess is: just as well. It’s a treat to watch such brave and agile bodies work through Synetic’s recurring themes and visual styles. Here, as with the recent Dante, they explore how the grotesque can sprout out of seeming normalcy, and how the raw trauma of living can beat and corrode a series of gorgeous lines and regal poise into new and unusual shapes, freshly bruised and broken.

The theater magic is great throughout. The demon that resides inside Dracula got there, in a truly frightening moment, by crawling directly into his body. Later, standing in misty spotlight, the Count grows to superhuman height without any strings attached. The scene in which Mina’s friend Lucy (Mary Werntz) falls to the fangs is tremendously predatory and disturbing. Here, Irina Tsikurishvili’s choreography is a palpable success, and the fight sequences choreographed by Ben Cunis are explosively creative and well executed.

Ultimately, it’s no huge crime that Dracula embraces its legacy, wrapping up its cheesy side as well as its truly terrifying aspects in the same flowing cloak. Thanks to a lot of hard work, the stage is soaked with dread, and it’s only fair that such trembling precedes the legendary vampire to his entrance.

And by the end, he has us. Before munching down, Dracula breathes warm words onto Mina’s icy neck. “You shall outlast the centuries,” he whispers. Oooh… shivers.

NOTE: I have previously worked with Synetic Theater in an artistic capacity. This has not affected the objectivity of my review.