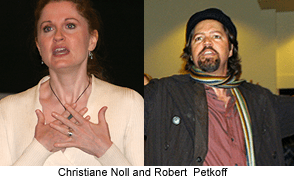 Recorded at the NYC press introduction to the cast of Ragtime.

She’s not only playing mother to Little Coalhouse Walker, Jr. in the about-to-open Broadway production of Ragtime, Christiane Noll is also playing mother to her young toddler. How will she juggle both these motherhoods on the road? Has becoming a mother changed her performance as Mother since the Kennedy Center production? 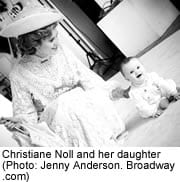 “I have an incredible support system. It takes a village, especially when I am doing all of this. I’m always running around holding on to the doll. I won’t put it down..”

Listen in as Christiane describes her new challenging life on the road, and working with her new Tateh (Manoel Felciano played Tateh at the Kennedy Center)- Robert Petkoff, the man with “the sparkly eyes”.

Robert Petkoff steps into the role of Tateh  after spending 20 years acting in NYC, and has been performing the last six years in musicals.

“I started out doing Shakespeare and sort of fell backwards doing musicals” like the recent revival of Fiddler on the Roof at the Minskoff Theatre, where he played the role of Perchik. “Tateh is like Perchik on steroids! Perchik wants to change the world, while Tateh wants to change his life and the life of his daughter”.

Listen in as Robert talks about how he relates to Tateh and his family’s story of how they immigrated to America and the challenges they faced when they came to America, the audition process, and why it’s the best time now for Ragtime to return to The Big Apple.

My interview with Christiane and Bobby Steggert here