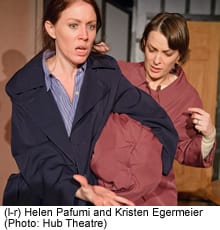 Energy abounds in We Won’t Pay!  We Won’t Pay! which rips and bounces along in mad-dash silliness.  The text hurls zinger references to hunger, alludes to massive unemployment, invasion of privacy, police-state intrusion, all packaged in a 1950’s “Honeymooners” head of household couple’s mentality.

Helen Pafumi gives a knock-down drag out performance as the crazed inventive wife, Antonia, hell-bent on exclaiming the rights of liberty and justice for downtrodden women everywhere, while in the confines of her own safe kitchen.  In an odd national state of affairs, the country is gripped in a financial meltdown that seems like a mix of depression and recession—work is scarce, people are hungry to the point of polite starvation,  and every one is on the brink of despair while carrying on their daily lives.  In this powder-keg waiting to happen, Antonia finds herself smack in the middle of a spontaneous display of civil disturbance, manifested as women grabbing goods off the grocery shelves protesting a sudden price-hike, and walking calmly and deliberately out of the store filled with righteous indignation.

In Lucy and Ethel mode, with nods to Laverne and Shirley, Antonia is accompanied by her trusty side-kick Margherita played adoringly by Kristen Egermeier with doe-eyed hysterical appeal.  Egermeier has the physical burden of having to hide all of the bounty of ill-gotten goods in her burgeoning coat as law enforcers make a dragnet sweep of houses in search of the stolen merchandise.  Egermeier shows amazing prowess and agility hiding unwieldy assortments of canned and dried goods all while demonstrating the power of silent reaction.  While Antonia is a whirlwind of non-stop chatter,  Margherita  stays in perfect pitch character without saying a word, sinking further into dismay while her buddy spins hypothetical tales spiraling them deeper into a vortex of hyperbolic exaggeration and conjecture.   Somehow, she holds it all together, including all the cartons of groceries in her coat that take on a life of its own, almost literally, since her burgeoning size has to be attributed to something – how about an unrevealed pregnancy to hide the merchandise?

Unlike in a sitcom where Lucy would eventually have some “s’plaing” to do, these characters are trapped in a never ending cycle of bizarre moments that keep toppling over each other in zaniness. The high quality of actors keeps the whole thing from mounting over in frothy pile of goo.   Michael Kramer, usually seen in serious dramatic works, demonstrates well-honed comedic chops here as Antonia’s husband, a zealous law-abiding citizen who would rather be struck by lightning, chew off his hand and starve to death than be dishonored by accusations of thievery.  The stakes are obviously high to keep him from knowing what’s stashed in the cupboards and under the bed.  James Gagne, plays the other blustering husband, Giovanni,  and the two stumble about in clueless bewilderment, trying to make sense of Antonia’s senseless explanations, but living in the moment and making do with what they have, even if it means making rabbit head stew with birdseed and snacking on cans of gourmet dog food.  John Slone plays various roles with wonderful comedic timing that rivals the best, often in a two-bit moustache that takes on a life of its own.

Director Patrick Torres keeps the pace at slap-stick speed with people slamming along at neck-breaking speed, smashing through the fourth wall to include the audience in the shenanigans, including a funny passage when the husbands do an Abbott and Costello-inspired routine in front of a makeshift room divider.  Torres plays the ultimate traffic cop, scooting the actors through the passages, criss-crossing the stage, up and down the aisle, even using a tall standup wardrobe chest for a lighthearted twist at the end.

The simple constructed set design by Hannah Crowell converts an open warehouse to reflect a decent living space with a bed at far left and kitchen area, including the painfully empty refrigerator far right.

Playwright Dario F0 blends and bends time and social sensibilities by interweaving a 1950’s J. Edgar Hoover-veneer with dialog referencing Rodney King and Hilary Clinton.  The characters may live hand to mouth, one-paycheck away from poverty, destitute and pointedly hungry, but they have their dignity. He plays with aspects of personal responsibility while wrestling with the premise of civil disobedience in the public good in a blustering routine in the manner of Noises Off.  He sets up this ambitious kaleidoscope of styles, messages, tones and bizarre twists, lets it rip, and hopes for the best. For the most part, it works.  Some moments feel forced while others draw sighs instead of chuckles after one too many twists hammer home the humorous intent.  In the bizarre eclectic mix of tones, including the somber ending reflections, the playwright seems to take himself too seriously when he suddenly shifts from slapstick to polemic.  Nothing’s wrong with going from clown antics to intellectual treatise, but a hint or provocative inkling would have eased the transition.

If nothing else, the playwright covers a lot of territory, and while he binges on the bizarre, he brings an innovative perspective and approach to discussions about the social contract even when its gone amuck, and civil responsibility.  That one can have a romping good time while being reminded of the security of friendship, loyalty, and the power of caring, is a good thing, especially pertinent today.  The emphatic repeated title of the play reflects its earnest intentions.  That the characters only murmur the title’s sentiments while striving to survive day-to-day, fits our reality to a tee.