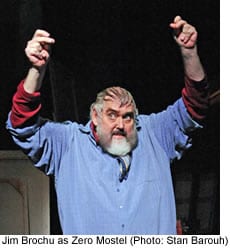 When Jim Brochu was here with his solo show about the great Zero Mostel, he and his director Piper Laurie talked with Joel about creating Zero Hour.

There was more to the conversation which we’ve saved til now to celebrate Zero Hour‘s opening Off-Broadway. So relax, and listen as Jim Brochu, surely one of the greatest storytellers ever, shares backstage stories about his encounters with Barbra Streisand, Katherine Hepburn, and the afternoons spent playing backgammon with Lucille Ball in the last year of her life which he later turned into a book “Lucy in the Afternoon”.

Joel had two stories he was dying to hear from Piper Laurie – how she began her flower diet, and her starring role in the movie “Carrie”, both of which she tells with great relish. 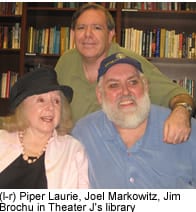 The interviews end on a high comic note as these two friends recall their worst moments on stage, and Piper shares her secret name.

For those of you who have wondered what it would be like to sit in on a Joel Markowitz podcast, here’s a video clip recorded by Steve Schalchlin.