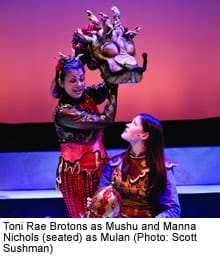 Mulan is by far my favorite of all the Disney stories, so I – and the sell-out crowd around me – eagerly anticipated Imagination Stage’s adaptation of this popular musical.  It was fun to watch and hard to keep from singing along.

The story takes place in ancient China, where Mulan defies her family by pretending to be a boy and signs up to fight in the Chinese army in place of her disabled father.  Mulan’s ancestors send Mushu, a lucky dragon, to watch over her, but Mulan is the one who comes up with a clever solution to defeat the Huns.  When her disguise is discovered, Mulan is sent home, but ultimately, after figuring out how to save the Emperor, she gains the honor she deserves.

It’s a solid story but the music is what makes this show so appealing.  Director Janet Stanford’s national search to find the right person to play Mulan paid off.  Casting Manna Nichols was brilliant as her gorgeous voice carries the show.  Her counterpart, Nathaniel P. Claridad (Shang), also gives a strong performance.

Ricardo Frederick Evans as the hilarious matchmaker and scary bad guy (Shan Yu), and Matt Dewberry (Chi Fu), who keeps us laughing with his periodic notes “to self”, wow us with their energy and stage presence.  And the group numbers, “I’ll Make a Man,” “A Girl Worth Fighting For” and “Keep Them Guessing,” are all extremely entertaining and well executed.

As for Mushu (Toni Rae Brotons), having her hold her dragon head ties up her hands and blocks her face, keeping Brotons from deftly delivering the one-liners Mushu is famous for.  Wearing her headpiece alone (with its gorgeous dangling beads) wouldn’t be as distracting. It would allow Brotons more freedom for comical expression.

Another distraction is the accented English.  Especially in the second act, there are French, Italian, and even German accents in the dialogue.  One kid commented that the grandmother’s speech sounds more Yiddish than Chinese.

By contrast, the sets (Ethan Sinnott) and costumes (Emily VanDervort) are beautifully authentic.  Particularly notable are the wooden-faced and billowy-bodied ancestor props, and the hair pieces and hats, whose beads and baubles add charm and character to the cast members wearing them.

Humor is a major draw for this show.  The parent next to me laughed uproariously at all the more sophisticated jokes, while the younger set giggled when Shang and his army disguised themselves as Chinese maidens.  There’s something for everyone here.  And don’t worry if you don’t know the music beforehand.  By the end of the show, you, too, will be humming at least one of its catchy songs.

Note:  Bring an extra sweater as the theater gets quite cold.