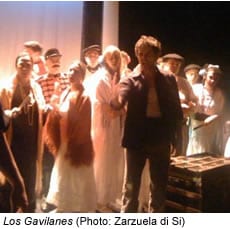 Since its origins in 17th century Spain, the zarzuela has morphed into a unique form of modern musical theater, with more twists and turns than Stephen Sondheim ever could dream up.  Composed in 1924 by Jacinto Guerrero, Los Gavilanes are sparrow hawks that prey on little birds, a metaphor for how greedy relatives can mess up a family’s life. So watch out.

As depicted by Zarzuela Di Si, Guerrero’s gorgeous musicality soars closer to the earth without a drop of sentimentality. That’s because Spain’s musical comedy comes from street theater that started out on a high, royal road. Literally translated, zarzuela means “thorny bush,” or “threat,” like the prickly ones surrounding Spanish King Philips IV’s hunting lodge. Clowns performed slapstick routines and sang popular folksongs to celebrate their liege’s kill-of-the-day in his palace digs. In the 20th century Guerrero, among other playwrights, expanded the range into the structured economy of a three-act, tragic-comedy shocker: It’s not just a raw jungle out there in the street but also behind closed doors at home as well. Families don’t exactly eat their daughters’ flesh; they sell it in arranged marriages. So where’s the romance and comedy that make The Sparrow Hawks a musical?

There’s something mysteriously wonderful about this grande-zarzuela, with three high points that succeed in competing with Italian opera, and give off such a sweet aroma, you’re transported into another world. The toe-tapping songs, interspersed with dialogue, spin out a morality tale that tops off with a heady moral. And to bring together an intricately-threaded plot, the four principal singers, Jose Sacin, Alvaro Rodriguez, Serena Canino and Sophia Benedetti put you in the moment.

In his first stunning aisle entrance, baritone Jose Sacin’s ringing voice is hypnotic as he sings the memorable, “My Village” “Mi aldea.” “How my soul is reborn/by seeing you once more, my home!”  Robustly sung straight to the audience, in a confrontational style, Sacin’s solidly secure baritone voice captures the homesick yearning of a rich, aging man, who’s basically an honest, good person, returning to the village of his youth in Spain. We love him; but soon dislike him. Once a poor boy, Juan is now “rich and powerful,” laden with gold and silver from Peru. Yet he is oddly sad and willing to sacrifice his soul over the loss of his life’s love—the beautiful Adriana.

Once soprano Serena Canino (Adriana), who sings with magnificent command, is reunited with Juan, she recalls how her mother Leontina (Patricia Khan) forced her to marry a rich, old man.  Juan, the rejected suitor, had to leave Spain to pursue his fortune in colonized Peru. Now years later, after the death of her husband and depletion of her fortune, Adriana, again poor but proud, introduces Juan to her beautiful young daughter, Rosaura, (Sophia Benedetti). Immediately, Juan is struck by their physical resemblance and his passionate love is rekindled. Now here comes the shocker: Juan’s passion is not for Adriana; but for Rosaura, her daughter.

In the distance, another high point is reached when the young and also impoverished Gustavo, (Alvaro Rodriguez), becomes a strong contender. Rodriguez, handles well the high reaches of the glorious ballad/aria, “Flor Roja,” or “Red Flower.” His voice takes on a warm immediacy and clear urgency that in a crescendo of commitment in declaring his love for Rosauro, he sings, “I say to my beloved that my feelings are constant,/they will not wither, like these flowers!/…” Oh, if that doesn’t melt you down, just wait, there’s more.

Enter Leontina (Patricia Khan), who plays the evil Grandmother with relish; a demonized, old crone, with more greed than blood in her veins. Juan, once Adriana’s suitor, is now a great catch for Rosaura, she says, to guarantee the family’s social security. And Leontina easily tempts Juan into a marriage deal with the reluctant but helpless Rosaura.

There’s still a third performance high point that must be mentioned. It’s the blend of the two soprano voices in an Act III duet: Sophia Benedetti, as Rosaura, whose voice is in pitched high, Italian del canto style, huddles with Canino as her mother, Adriana, to create a breathtaking blend, filled with expressive pathos in: “No merece ser feliz.” “You do not deserve to be happy.” Mother and daughter, a generation apart, lament that this arranged marriage with Juan is necessary for survival. Yet, we know from this moment on, that the two women are rebelling and somehow will stick together. The grandmother’s past mistake of enforcing the tradition of marriage for necessity will not be repeated. And Juan, as depicted by Sacin, nails you to your seat in a strong portrayal of endurance through suffering, important to convey as groundwork for the upbeat ending that brings satisfying closure.

Pianist Tessa Hartle deserves many accolades and cheers for a noble two-handed piano performance that holds this tricky, polyphonic musical score with its syncopated tempo changes from foxtrot to Tango milonga rhythms. It’s only a hint at what full orchestration could do.

Stage direction by Luis Alejandro Simon, who also plays the role of Clarivan, the Mayor, uses the Tivoli Theatre space expansively and creatively for theatrical purpose. One particularly fine stage moment happens when the townspeople all gathered behind an upstage, gauzy scrim, cruelly turn their backs on Rosaura, who is downcast and alone, spot-lighted in glaring white light by designer Ann Fedorcha, who also shades in some hellish red lighting at apt points

Remember Durrenmatt’s dark-themed The Visit that Kander & Ebb brilliantly adapted into a musical that Signature Theatre revived in 2008? Similarly, The Sparrow Hawk deals with the extremes of what people will do for money. But it’s the strong ensemble work of the four principals at Zarzuela Di Si that make a difficult drama succeed musically. Both Sacin and Rodriguez are remembered as working together in Torroba’s Luisa Fernanda , performed at the Mexican Cultural Institute (2008) in Washington D.C. In another production, Rodriguez sang a featured role in Amadeo Vives’ Bohemios (Bohemians) in 2007 with The Opera Theatre of Northern Virginia. (Both zarzuelas were reviewed at the DCTS site.)

In Spanish, with English surtitles.

Los Gavilanes concludes today, Dec 13th, 2009, at 5pm.  Zarzuela Di Si will be back in February 13, 2010 with La Leyenda del Beso (The Legend of the Kiss). Then on April 10, the wonderful Barbieri El Barberillo de Lavapies will be performed. And more productions of Los Gavilanes to be announced will be repeated.