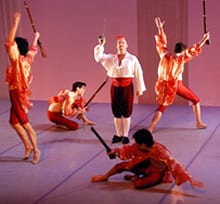 In Series Opera and The Washington Ballet Studio Companies have collaborated in a great leap forward to celebrate the genius of Mozart’s playfulness. It’s an evening of over-the-top effervescence — as if a wild, warm wind has come to earth in the Atlas Theatre’s Lang auditorium.

At the piano to the side of a stripped bare stage, Carlos Rodriguez, who directs the music, invites us to the party with a single-line tune, composed by Mozart as “Ah, Vous Dirai-Je Maman: Theme & Variations 1-6,” but recognizable as “Twinkle, Twinkle, Little Star,” a piece that frames this musicale. Immediately we’re drawn into a child’s world until the variations break out into fast running 16th notes, off-beat patterns and arpeggios. Language doesn’t matter. Words are musical notes. The libretto is movement— dance. Choreographer Septime Webre can develop even a nursery rhyme tune into something visceral, gutsy and thrilling.

In his first year with The Washington Ballet, dancer Jong-Suk Park projects a refreshing stage presence as that of a baby-faced upstart, deceptively fragile, but rock solid in firm technique, and boundless energy that is matched by an entire ensemble of Studio Company Dancers. As the theme varies, one by one, dancers enter, in burnt orange tights and luminous chemises (costumes by TWB). Their eyes connect, electrifying the air with a sense of fun. From entrechats to snappy turns, arabesques and near-splits in their grand leaps, the breathtaking athleticism traces out the music and hits us viscerally. The dancers make us feel the music kinetically.

Then like lightning, the fusion of dancer and pianist are interrupted by a full-scale entrance of the rest if the cast, who laugh maniacally and run across the stage for no apparent reason. Suspend all logic. The performers are coming from a madcap fête. From this point on, anything goes; and the stage explodes with vitality, thanks to co-choreographers Jared Nelson and David Palmer, who also conceived this masterpiece tribute to Mozart’s 254th birthday.

We may know Mozart from another mad laugher, actor Tom Hulce in the Hollywood film Amadeus, based on Peter Shaffer’s play . Or devoted Mozart fans may know the darker realism from a 1986 German film, Forget Mozart (Vergesst Mozart), that sheds a cynical light on the mystery of why the ultra-gifted composer died at age 35. WAM comes back with a punch line. This is a fresh take of a more robust Mozart who, although slender of stature, was a revisionist, a game changer who revolutionized music.

Hats off to an amazing directorial team who are inspired as bold innovators in stagecraft as well as by the enflamed soul of Mozart: Webre, Palmer, and Nelson, for TWB, and by the ever-expanding, dedicated artistry of Carla Hubner and Carlos Rodriguez for In Series Opera Company. The collaboration propels us into the magnitude of Mozart’s genius expressed through fusion, even of styles. Sometimes the dancers dance barefoot, modern-style; sometimes the female dancers pirouette in point shoes. The dancers are party to two levels of consciousness, staged as two parallel universes: dancers and singers; and are held down to earth by Mozart’s letters to his father, his sister, and mother and a priest. It’s a brilliant concept.

Roughly it helps to know we are following a historical timeline, stitched together by David Palmer, a co-director of the Washington Ballet. WAM draws from an amazing diversity of compositions, individual selections from the operas Idomeneo, Abduction from the Seraglio. Marriage of Figaro, Don Giovanni to The Magic Flute, as Mozart sought to convert an Italian opera style into a German language theater. Characters were not mythical stereotypes, but witty humans with ideas. And that may explain why Austrian Emperor Franz Joseph denied Mozart court appointments. Mozart, who composed entire operas in his head and hummed his melodies while walking the streets, was centuries ahead of his time.

Perhaps Mozart’s most popular and world famous opera, included in WAM in At the Opera (Act II), is The Marriage of Figaro which garnered him the equivalent of rock star fame in Prague and Europe. Figaro is based on the revolutionary play by Beaumarchais that ushered in Mozart’s innovation of infusing subtext and characterization into instrumental accompaniment, so that violins or woodwinds expressed the rebellion his characters could not on stage. In WAM, the dancers are the orchestration. We forget how radically daring it was to sing mocking, elbow-poking arias, like “Come Dance With Me, Little Count,” for example. Figaro, sung by the versatile, young baritone Sean Pflueger, is encouraging anarchy by making fun of the aristocrat’s assumed right to sleep with his servant girl. Kensuke Yorozu and Jong-Suk Park are a delight as they dance out the rebellious, upending defiance that Mozart must have felt at the time but could not express in a society in which dancing was banned in the emperor’s theater in Europe, then merely a few years away from France’s Reign of Terror. WAM’s answer is to place the dancers center stage, as if it is well worth going to the guillotine.

Palmer in his conception of WAM realizes that to fully understand Mozart, focus needs to go on the carefree days of “On Tour” starting with “Letter to his mother, December 1769,” (written when he was 13). “A Little Night Music,” technically marks a directorial zenith. Accompanied by duo concert pianists Carlos Rodriguez and Carla Hubner, the dancers reincarnate the perilous trips by horse and carriage, and capture the rapturous joy in the rhythm and cadence of pounding hoofs. Leopold Mozart capitalized on his child prodigy son by traveling through Vienna, Paris, and London and giving concerts. Male dancers poised in attitudes prance like horses; others imitate turning carriage wheels and a driver holds the reins. An exciting, memorable stage moment replicates Mozart’s young life as a joyful adventure.

But all is not smooth sailing in Coming of Age, WAM on his own. “Ready for Battle,” as sung with resonant fire by tenor Peter Burroughs, and danced by five dancers who raise a white ladder to rescue Konstanze, a character close to real life. Leopold opposed Mozart’s choice of Constanze as his wife; so Mozart defied his father in the mock-heroic, The Abduction from the Seraglio, Mozart’s first German-language singspiel. The opera brings in great lusty fun from a trio of dancers, expressed in “Long Live Bacchus,” expressions of Mozart struggling to free himself from his overbearing but protective parents.

Meeting and falling in love with Aloysia and Constanze, (in Act II) gives us two breath-taking, gravity-defying pas-de-deuxs worth noting by female dancers Ayano Kimura and Tamako Miyazaki, and Jong-Suk featured as Mozart, that are danced to “Gentle Breezes, Go To Him,” (from the opera Idomeneo). Here we see Mozart’s worship of Aloysia, who cruelly rejects him, whereas Constanze passionately loves and marries him. This selection is gorgeously sung with creamy colors by coloratura soprano Laura Lewis, costumed in floor length white gown (costumes by Donna Breslin). Jong-Suk’s flying leaps express the lovers’ held back love for each other.

But Mozart wasn’t above slapstick in his operas as evidenced by Papageno in The Magic Flute. For the collaborators, that justifies poking fun at theatrical form. Osbel Susman-Pena’s stylized set with skeletal black chandelier deploys a stock-in-trade trick from Belasco melodramas by stretching turquoise fabric across the stage to simulate a channel of water with revolving cut-out dolphins. Twirling white umbrellas are an apt prop for a visually pleasing dance chorus line number in the “On Tour” sequence whereas top hats for the London visit serve as a little anachronistic music hall joke. Sometimes it seems as if the musicians are accompanying the dancers; or is it that the dancers are accompanying the singers? It doesn’t matter; it works because the emphasis is on letting Mozart’s music reign supreme. We’re not into the opera text. We’re reliving Mozart’s life and that includes his sense of abandon or exhaustion when the dancers allegorically collapse comically on the floor at the end of an aria.

Eventually the Epilogue winds the clock back to where it started except that the dancers have lost their verve. Dance routines are reprised but Jong Suk walks to the pianist and rests his hand on Carlos’ shoulder; then drifts slowly off stage. “Twinkle twinkle little star, how I wonder what you are,” takes on a deeper meaning as the empty stage seems cavernous. I wept.

This production represents the artistry that can be realized with collaboration, an incredibly impressive piece of work after three weeks rehearsal. Go catch that shuttle at Gallery Place. Directions on how to get there by shuttle from Gallery Place can be found on the In Series web site. Use it. On weekends, from 5 p.m. on, about every ½ hour. Street parking is chancy.

WAM! Wolfgang Amadeus Mozart, A journey through Mozart’s life in music and dance

Based on Mozart’s letters, as conceived and adapted by David Palmer
Music by Wolfgang Amadeus Mozart
Directed by Septime Webre and David Palmer,
assisted by choreographers Jared Nelson, for TWB, and by Carla Hubner and Carlos Rodriguez for In Series Opera Company.
Produced by the In Series and The Washington Ballet
Reviewed by Rosalind Lacy