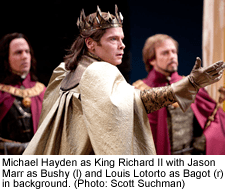 Behold the King (Michael Hayden)! He looks marvelous – sitting on his gleaming golden throne, wearing magnificent clothes. His gold crown flows from his lustrous hair as naturally as if it grows from his head, and he surrounded by flattering courtiers (Louis Lotorto, Jason Marr, and Scott Whitehurst). He looks as if he was born to royalty – as indeed he was, a King at ten, now well into his majority, the grandson of the great King Edward III. It is 1397, and Richard II is about to undergo one of the greatest falls in the history of England.

What sort of man was Richard II, that he could one year be the unquestioned monarch of a great nation and the next lie half-naked in a prison in Pontefract? In Shakespeare’s telling, here done with great fidelity and exceptional lucidity by the Shakespeare Theatre, he was a suppurating narcissist, overstuffed with notions about the divine rights of Kings, in which he believed as we believe in gravity. When Richard’s enemy Bolingbroke, later Henry IV (Charles Borland), leads a deadly march on London, Richard airily dismisses him: “For every man that/Bolingbroke hath press’d/To lift shrewd steel against our golden crown,/God for his Richard hath in heavenly pay/A glorious angel…” Unfortunately for Richard, the angels apparently missed the transport to England.

It is a narcissism which allows Richard to dismiss the dire warnings of his uncle, Thomas Duke of Gloucester (Floyd King) and then to dismiss Gloucester; which permits him to assent to a cowardly plan by Thomas Mowbray (Darren Matthias) to murder Gloucester in his home and then, when Henry accuses Mowbray of the killing, to cavalierly exile his loyal assassin for life. (He also exiles Henry for six years.) It is a narcissism which encourages Richard to plunge his country into endless and generally unsuccessful wars – with France, with Scotland, with Ireland – and to support them with ruinous taxes. When he confiscates the lands and goods of John of Gaunt (Phillip Goodwin) upon the latter’s death, it is enough, finally, to impel John’s son Henry to take up arms against the King.

Richard’s narcissism, however, is insufficient protection against Henry’s overwhelming force, and when the two men meet, a near-hysterical Richard offers to throw down his crown to Henry, who has only asked for his lands and titles back. At this moment, at the conclusion of the first Act, the play begins to shift. Richard moves from delusional self-confidence to delusional self-pity, and the shrewd, feral, ruthless Henry, about whom Hamlet’s description of Claudius (“O villain, villain, smiling, damned villain!”) could apply, begins to take over the play.

Many Shakespeare scholars argue that in the second Act, Richard recovers his humanity as a prisoner of Henry. I did not see it here, and I do not see this viewpoint much supported in the text. Richard surrenders his crown to Henry in a scene startlingly similar to one in another play about a deposed King, Marlowe’s Edward II. He offers it, but cannot let it go. He sees the inevitability of surrender, but cannot face the future. Later, alone in prison, he mawkishly imagines a land where the face of God is still visible, and he is restored to his proper place. When Richard’s groomsman (Larry Paulsen) reveals that Henry rode Richard’s favorite horse in his coronation, Richard is bitter that the poor animal didn’t stumble and fall. “That jade hath eat bread from my royal hand;/This hand hath made him proud with clapping him./Would he not stumble? would he not fall down…” Richard’s best moment is when he later embraces the groomsman – the King touching a commoner, unthinkable in act One. The impeccably bloodthirsty Ross (Stephen Paul Johnson) makes sure that it is Richard’s last act of kindness on Earth.

Hayden and Director Michael Kahn appear to have chosen to make Richard self-obsessed from his opening moments until the second Ross’ sword plunges through his body. It is a bold choice, fully justified by the text, and Hayden brings it off beautifully. I bought Hayden’s portrayal of this self-deluded man every second he was on stage, and you will too. The problem, of course, is that Richard is inherently unlikeable, and as real as Hayden makes his dilemma, it is impossible not to think that he is getting what he deserves. This is not the production’s problem, or Shakespeare’s. It’s history’s.

Hayden’s efforts are sweetened by the fact that he, and the production, gets uniformly excellent support from the remainder of the cast and the technical staff. Borland is spectacular as the aggressor King Henry, who early on in his reign faces several crises similar to the ones Richard botched in act One, and finesses them beautifully. Borland is wonderful on the uses of silence; Henry is often silent under circumstances where Richard would yammer away, and some of Borland’s best acting is when he shows Henry restraining himself from speech. There is a particular scene in which Aumerle (Tom Story), who shifts alliances with the skill of a surfer riding a big wave, begs Henry’s pardon for a crime to which he has not yet confessed. You can almost see the wheels turning in the King’s head before he offers a pardon for the crime if it has not yet been committed. Thereafter, Aumerle’s father and mother, the Duke (the marvelous Ted van Griethuysen) and Duchess (Naomi Jacobson) burst into the room and we are treated to a slam-bang comedy, animated principally by Jacobson’s unparalleled comic chops and abetted significantly by Borland’s George Burns-like takes.

There are several other superb performances, notably van Griethuysen as Richard’s sole surviving uncle, torn between his loyalty to the crown and his knowledge of his nephew’s incompetence; Derrick Lee Weeden as Henry’s enforcer, the ruthless Northumberland; Phillip Goodwin as John of Gaunt, founder of the Lancastrian line (he also has a brief and effective appearance as a gardener) and Floyd King, who plays both Gloucester and the Bishop of Carlisle, a conspirator against Henry.

And there’s more: every single member of the cast supports the play’s superstructure, in ways that are natural and convincing. When Richard prates on about how God will make him prevail against Henry, the pain and disappointment in the faces of his supporters is visible. It is a telling moment, and a typical one in this play. It serves as a reminder, once again, that Michael Kahn is one of the best directors in America.

There are some scenes in this play which whet our appetites for history yet to be. Northumberland’s imperious labors on King Henry’s behalf presage his betrayal in Henry IV, Part I, and his son Hotspur (DeVon Jackson), the principal antagonist of that piece, makes a brief appearance here. Late in the play Henry mopes on his throne, awash in disappointment over his wastrel son, setting up a chain of events which will culminate in Henry V.

Shakespeare took some liberties with history in this play, apparently for artistic rather than for ideological reasons. Gloucester had been arrested by Richard and was in the custody of the Earl of Nottingham when he died, and thus could not have been kidnapped at home, as Shakespeare has it. Richard’s wife Isabel, written by Shakespeare as a passionate, love-besotted woman and portrayed here by a beautiful and mature actor (Rachael Holmes), was in fact nine years old when Richard died. Although the circumstances of Richard’s death are uncertain, most historians believe Henry had him starved.

The text of Shakespeare’s play begins with the confrontation between Bolingbroke and Mowbray over the killing of Gloucester. We only later learn that Richard approved Gloucester’s killing, and Mowbray carried out his orders. Kahn has reversed the order with which we receive this information by opening Richard II with a portion of a play called Thomas of Woodstock (author unknown) because, he says, he had observed audience confusion during the first four scenes of Richard. It achieves his purpose; there is no confusion here about what happened.

—  If you have trouble keeping all these Richards and Henrys and Edwards straight, as I did when I first started reading the history plays, here is a brief chart of English monarchs I have put together for this occasion. —