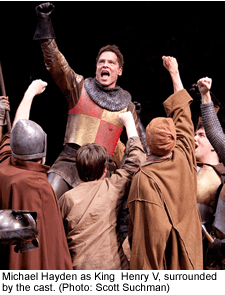 When we last left England, Henry IV, having deposed Richard II, was on the throne grumbling about his son, the wastrel Hal. “Can no man tell me of my unthrifty son?/’Tis full three months since I did see him last;/If any plague hang over us, ’tis he.” It is now a generation later; Henry and Richard are dead, and the unthrifty son is King of England – the greatest in history.

If Henry V has a less formal narrative arc than the other history plays, it is because great Henry’s feats were well known to Shakespeare’s audience, and to any school child in Shakespeare’s day. It is less a play than a celebration, looking back at Henry’s many triumphs of will, courage and judgment with the same sort of joyous reverence that we Americans accord to Washington and Lincoln. Shakespeare provided the text, and the audience provided the subtext. Henry V is a series of anecdotes which, though they lead to an end, are made to hang together through the use of a modern-dress chorus (Ted van Griethuysen, Robynn Rodriguez, and the most excellent Larry Paulsen, who appears as a professor so arrogant and foppish that you know he has received tenure.)

This doesn’t mean that Henry V is inaccessible to modern audiences. On the contrary, it is highly accessible since we are well familiar with courage and judgment, joy and reverence. On the surface, it is an account of Henry’s against-all-odds campaign against the French, culminating in his fantastic triumph at Agincourt. At bottom, though, it is a description of how a moral man exercises great power.

And how does a good man lead? In Henry V he does so gravely, even reluctantly, and with full knowledge of its consequences. The very first scene makes us aware that Henry’s court, and the Church, wants him to claim the throne of France. It is only Henry (Michael Hayden) who shows reluctance. He demands full legal justification for the claim from the Archbishop of Canterbury (Phillip Goodwin), but when he gets it,  he knows that the call to war will be irresistible, and so puts on his armor and takes on the duty of a King. His resolution hardens when he receives a preposterous insult from the haughty French dauphin (Tom Story, doing his customary fine work) delivered by a sneering messenger (John Lescault). The die is cast, and the King must reply with steel.

The road to Agincourt leads Henry through a blizzard of bewildering moral choices. In each case he travels the road most painful and difficult to himself. He uncovers treason in the English court, but is uncertain how to deal with the traitors – Cambridge, Grey, and his beloved friend Scroop (Sun King Davis, William LeDent, and Jason Marr, respectively) – until they unwittingly betray themselves by urging harsh measures against a much more minor offender. He has the traitors killed. Later, campaigning in France, one of his miscreant soldiers is dragged before him for stealing communion wafers. This is a capital offense in Henry’s army, as the King is painfully aware that he can never rule a land which he has allowed his soldiers to ravage and pilfer. He recognizes the thief: it is his old friend from his days with Falstaff, the half-witted, carbuncled drunk Bardolph (Floyd King.) He has Bardolph executed, and then weeps over his corpse. (The moment when King as Bardolph makes the stupefied recognition that the King who will pronounce his fate is his old friend is a freeze-frame of theatrical perfection; I hope someone tapes it so that aspiring actors can see how the role should be played). Henry walks through the camp disguised as a common soldier to see what his men really think of them; when one of the soldiers (Scott Whitehurst) tells him something he doesn’t want to hear, he flies into a rage, which the soldier matches and exceeds. Henry has the satisfaction of confronting the soldier again, this time as the King, but rather than punishing the man for his presumption, he rewards him for his honesty, which has alerted the King to morale problems in the camp and has inspired his St. Crispian’s day speech.

Henry V, thus, is really an account of the legends of the King, and so it is a make-or-break requirement that the actor who plays the King be first-rate. Hayden is. He makes Henry a man of radiant goodness, at every moment familiar with his own limitations, humble, and aware of the fact that his subjects, while not nobles, are full of nobility. It is a bravura performance, and in Henry, Hayden creates a character completely the opposite of the character he created in Richard II, thus showing the highest calling of the actor, which is to put mind, heart and body in service to the text.

Of course, the ultimate test of any actor playing King Hal is his delivery of the Crispian’s day speech, perhaps the greatest speech in the whole of Shakespeare. Henry addresses his terrified subordinates, facing overwhelming odds at Agincourt the on the eve of St. Crispian. Hayden’s delivery, which begins slowly and rises to a crushing climax, had the audience rapt, many weeping. It is, of course, a speech for anyone who risked himself in a cause which justified risk. “He that shall live this day, and see old age,/Will yearly on the vigil feast his neighbours,/And say ‘To-morrow is Saint Crispian:’/Then will he strip his sleeve and show his scars./And say ‘These wounds I had on Crispin’s day.’” It is a speech which speaks to veterans of D-day, or Pork Chop Hill, or Khe Sahn, or of the wilds of Iraq or Afghanistan. “This story shall the good man teach his son;/And Crispin Crispian shall ne’er go by,/From this day to the ending of the world,/But we in it shall be remember’d;” But it also speaks to those who marched in Selma, and suffered under the dogs and truncheons there. “We few, we happy few, we band of brothers;/For he to-day that sheds his blood with me/Shall be my brother; be he ne’er so vile,/This day shall gentle his condition:” And indeed it speaks to anyone who ever took risks to do good, whether she be Peace Corps volunteer, or corporate whistleblower, or simply one who comforts the sick or afflicted or runs food to shut-ins or shovels his elderly neighbor’s walk when he could be inside watching CSI Miami. “And gentlemen in England now a-bed/Shall think themselves accursed they were not here,/And hold their manhoods cheap whiles any speaks/That fought with us upon Saint Crispin’s day.” His troops, ready for death and bathed in glory by that speech, go out and win an astounding victory.

Agincourt really was an astounding rout for the French. Outnumbering the English by 5 to 1 or even more, they channeled their entire army through a narrow, muddy neck between two forests. Weighed down by heavy armor, they soon sank down into the mud, some to their knees. They were sitting ducks for the English longbowmen. The body count which Henry exchanges with the French messenger – ten thousand French dead, as opposed to twenty-nine – is a little exaggerated, but the French lost at least six men for every English dead, and some accounts put the ratio at one hundred to one.

Though Henry V is, more than any other Shakespeare play, a story about one person, justice requires that we credit more than the superb Hayden. Story as the arrogant Dauphin was wonderful, and recalled – I do not know if this was intentional – the arrogant Richard, as Hayden portrayed him in Richard II. Dan Kremer, as the commander of the French armies, played nicely off him, and a scene they have together on the eve of battle was hilarious. Whitehurst is terrific as the man who would battle a King, particularly in the scene in which he discovers exactly who it was he challenged. The soldier is terrified, but he keeps his dignity, and Whitehurst balances the two impulses precisely. And immense kudos must go to Rachel Holmes as Princess Katharine, daughter of the King of France, the woman Henry must and does woo. Virtually all of Katharine’s lines are in French, which perhaps one-tenth of the audience speaks, but she keeps us all in stitches. This is the mark of a fine actor, who can make her audience laugh even though we have no idea what she is saying.

Aside from Holmes, the plays’ funny parts – in particularly involving the officious Welch captain Fluellen (Stephen Paul Johnson) and Hal’s old playmates Bardolph, Pistol (a properly fierce Darren Matthias) and Nym (Louis Lotaro) – never really catch fire. This appears to be due less from any failings on the part of the actors and more from the great moral seriousness with which director David Muse approaches the production.

There are a few historical notes, knowledge of which might make the play more enjoyable.  At the beginning of the play, Goodwin as the Archbishop of Canterbury and director Muse play the Archbishop’s complex argument that Henry has a right to the French throne for laughs, but his point would have been clear during Shakespeare’s time. King Phillip IV of France was survived by three sons and a daughter. The three sons all died without surviving issue but the daughter, Isabella, became the mother of Henry’s great-grandfather, Edward III. After the death of the last of the three sons, the French, invoking “Salic law” which prohibited the crown from passing through women if men were available, designated a son of Phillip IV’s brother as King. The Archbishop argued that Salic law applied only in a portion of German land later acquired by France, and not to the French succession – and thus that Henry IV as the heir of Isabella and Edward was the true King of France.

The play does not make clear how Henry discovered the treason of Cambridge, Grey and Scroop. This is because Shakespeare has altered history for dramatic purposes. In fact, the trio of traitors were plotting to overthrow Henry in favor of the Earl of March. It was the Earl, finally, who blew them in.

Henry died young, of dysentery, leaving only one son – the disastrous Henry VI. Katharine eventually entered a relationship with a man named Owen Tudor, to whom she bore a son. The son fathered Henry Tudor, who defeated Richard III at Bosworth and became King Henry VII. But that, as they say, is another story.