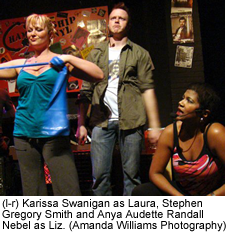 High Fidelity is an aggregate of great music (Tom Kitt, Next to Normal) with funny lyrics (Amanda Green) hung on a lame story (David Lindsay-Abaire, from the Nick Hornby novel) with unlikeable characters, and Landless plays the hell out of it. You will enjoy yourself immoderately, and afterward you may feel a little guilty for doing so. If so, go drink some beer (you’re in Adams Morgan) and celebrate your inalienable right to have fun.

Let’s go through the story first, since it’s easiest to tell. Rob Gordon (Stephen Gregory Smith), a loser who self-righteously believes that his integrity requires him to own a failing record store, has lost (through his most grievous fault) the love of sweet Laura (Karissa Swanigan). His sense of affront, supported by his obnoxious assistant Barry (Andrew Lloyd Baughman) and his socially maladjusted assistant Dick (Josh Speerstra), permeates the first Act, but it does not inhibit him from having rebound sex with Marie (Stefanie Garcia), whose principal virtue is that she once had sex with Lyle Lovett (who does not appear onstage, sorry).

In the meantime, Laura has rebound sex with the intolerable Ian (Tom Mallon), who is perhaps what George Carlin’s hippy-dippy weatherman would be like if he had a Master’s degree in Counseling, or was put in charge of a religion. Eventually, inspired by The Most Pathetic Man in the World (Juan Carlos Sanchez), who has magically morphed into Bruce Springsteen, Rob resolves to win back Laura, or at least to stop being such a jerk about her. You can guess what happens next. There is a truth-telling best friend (Anya Audette Randall Nebel) and the socially maladjusted Dick finds his socially maladjusted Annie (Genevieve James), so no cliché is left behind.

What Landless does with this unpromising material is magic.  Smith, who has justly won recognition as one of the area’s best song-and-dance men, here imbues Rob with a sort of fierce, misbegotten optimism which recalls the young Kiefer Sutherland. The man is a tool, you say, but he’s also pretty cool. It is impossible to dislike Swanigan, and as Laura she is a character who compels sympathy even as you question – well, completely disparage – her taste in men.

The remainder of the cast is comprised of the usual Landless suspects, complimented by a raft of gifted newcomers.  What they bring to the table matches Smith and Swanigan. Baughman has so patented the character of the blustering buffoon that it’s easy to forget what a fine singer he is; listen to him in isolation, if you can, and be impressed. Garcia has a fabulous voice, and her song – “I’m Ready to Settle (for You)” (you can guess what that’s about) was my favorite in the whole musical. Sanchez makes the transformation from Sad Sack to Springsteen with absolute conviction; his imitation is passable but his attitude is superb. And as Ian, who must be worse than Rob for the show to work, Mallon negotiates the line between character and caricature successfully. Ian, whose principal claim to fame is that he handled Kurt Cobain’s intervention (!), is an awful jerk, but he is a jerk you know, and are perhaps related to.

High Fidelity is a real coming-out party for Josh Speerstra, who has hitherto served Landless principally as a musician. Speerstra nails the hapless Dick, a man so anxious he seems too scared to think. Dick’s lack of confidence, it is immediately apparent, has been reinforced by hundreds of failures in his life, and Speerstra wears those failures with the casual insouciance of Mr. Rogers putting on his sweater. Plus he has a beautiful voice, highlighted in “It’s No Problem,” a song truly about nothing.

The most accomplished magician in this production is director-choreographer Julie Herber, who has managed to move her sizeable cast quickly, precisely and flawlessly around the DC Arts Center’s postage-sized despite the presence of five musicians and a boatload of props.  I hope her next job is to be in charge of our missile defense system. Some of those musicians (and, if you get a chance, observe the excellent work of keyboardist Charles Johnson) also become characters in the musical, and when they do, they move on and off the set so unobtrusively that you will not realize what happened until afterward.

I loved the hard-rocking music and the cynical lyrics, and I bet you will too. Those of you who believe that artistic skills are passed genetically will be pleased to know that lyricist Green is the daughter of Adolph Green, one half of the great writing team of Comden and Green.