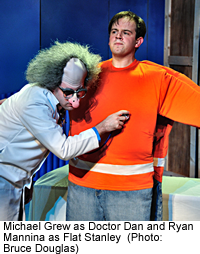 Where can you see a grown man, flattened kite-like soar on a string, get stuffed in an envelope, and even mailed around the world? In the wonderful world of imagination, where Adventure Theatre has enough imagination to flatten dimensions before your eyes. The stellar cast of The New Musical Adventures of Flat Stanley has a romping stomping time with the material which soars high (and low), as in Stanley’s literal kite flying days.  High parts include the camaraderie between Stanley and his brother Arthur, as they jostle and play in Stanley’s normal everyday pre-flattened life.  Ryan Manning’s Stanley hits the ground running with exuberant energy that twists and turns at every opportunity.  When bedtime stories are over and he’s supposed to be fast asleep, he bounces up throughout the night excited about all the possibilities, the “what ifs” and “wouldn’t it be fun to,”  that he shares with younger brother, nicely played by Michael Grew.

After the unfortunate incident of the actual flattening –ouch, a wee bit too literal for my tastes, although the little ones seemed fine with it— Stanley and his family adjust to his new two dimensions, and even when he drifts away as a kite, he makes the best of it, fulfilling his life-long dreams for  “one of a kind adventures” all over the world.

And what better place to showcase Stanley’s adventures than at the aptly named Adventure Theatre renowned for its quality children’s entertainment and nestled in beautiful Glen Echo park.   For this show, highly skilled artists, designers and craftsmen join some of the brightest performers and designers around.  Katie Brobst and Jade Wheeler return from their nifty performances in The Little Engine That Could, with dependable flair, and David Frankenberger, Jr adds a robust energy to round out the scenes. Set designer Jos. B. Musumeci, Jr, tapped into his fun-filled inner child in creating a versatile, colorful set awash in bright primary colors, portions of which slide in and out converting from a bedroom and kitchen, to a Parisian museum, to Hollywood, just a few of the dizzying assortment of Stanley’s destinations

With all the excitement, energy and appeal of the story, it’s surprising that a few moments fall with a thud, as flat as the adorable stack of pancakes on the kitchen table, or even, well, as flat as Stanley. It could be the humongous leaps of imagination required to keep up with the zig-zagging storyline which starts off with that rather frightening flattening.  Sorry to keep returning to that, but it’s alarming enough without all the bells and whistles in this production.  The music was bouncy and included sweet renditions of “I Wish I Were A Wand” and “Lonely in a Tree,”  but generally, the music bears the tell-tale markings of having been written by a team, in this case, four, with tunes jumbling all over the place, without any real standouts or coherent style to pull it all together.

More importantly, the piece has a scattershot approach and hammers at the funny bone instead of taps it.  Award winning director Nick Olcott went to his happy place in bringing clownish fun and interactive engagement to the story, but parts of the show have a more adult sensibility perpetrating as children’s fare which confuses the focus.  Some of the “make ‘em laugh”  sequences linger into clown territory a bit longer than necessary, and other bits go overboard for cheap chuckles, as in the case of the over-sized Hawaiian maidens or the unexplained lascivious attention from girls who preen and flutter for Stanley, unprovoked and from out of nowhere.  Maybe those touches are in the adaptation because they’re definitely not in the original book or its subsequent reprint.  Olcott maintains a fun clipped pace throughout, but if he struggled as hard to latch onto the heart of the story, and trusted the children’s innate sensibility to appreciate the humor, it wouldn’t come across as labored or gimmicky in spots.

Leave the gimmicks to the outstanding costume designer, Kendra Rai, who has the unenviable task of depicting a two-dimensional character who can slide under doors, fly as a kite, fit in an envelope, hit the waves as a surf board, and hang in a painting.  Hats off to the ingenuity and collaboration of the costume and set design teams, since the lines merged and blurred to depict Stanley in ways that must be seen to be believed.  The transitions occur with charm and ease.

All in all, The Musical Adventures of Flat Stanley at Adventure Theatre is a fun time with a treasured classic and relays powerful messages about getting past your fear, traveling is a blast, the importance of family, and making the best with what you have.  Plus, it offers a well deserved and appreciative nod to the U.S. Postal Service.

The New Musical Adventures of Flat Stanley
Based on the book by Jeff Brown
Book and Lyrics by Timothy A. McDonald
Directed by Nick Olcott
Produced by Adventure Theatre
Reviewed by Debbie Minter Jackson