Love Noir: The Music of Lenny, Kurt & Harold is a two-person cabaret show staring Lonny Smith and Maris Wicker.  The show presents eighteen songs from the songbooks of Leonard Bernstein (best known for writing the music for the classic Broadway shows West Side Story, On the Town and Wonderful Town), Kurt Weill (composer of “Mack the Knife” and “Sing Low”), and Harold Arlen (composer of the score for The Wizard of Oz including the classic American standard “Over the Rainbow”). 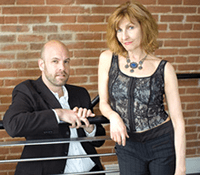 The songs chosen for this 60-minute show range from beloved classics such as “If I Only Had a Heart” from Wizard of Oz and “Something’s Coming” and “Cool” from West Side Story to lesser known selections including “Dissertations on the State of Bliss.”

As a lover of classic Broadway show tunes, I was really looking forward to this show.    However, in order for a cabaret show to be truly enjoyable it helps if the performers have exceptional vocal abilities and the willingness to let down their emotional guard to develop an intimate relationship with the audience sitting only a few feet away.  I saw this show in the mid-afternoon while the sunlight blazed through the painted over windows of The Point.  I am not sure whether seeing the faces so clearly unsettled the performers but for the first half of the show neither Smith nor Wicker made any eye contact with the audience members.  Instead, they gazed off in the distance toward the ceiling, which made me wonder at times if they knew that people were sitting in front of them.  This awkwardness affected my ability to focus on the wonderful songs they selected to sing.  It was a pleasure to see them engage more with us in later selections such as the funny and enjoyable “Ya Got Me.”

Smith, possessing a nice, clear deep voice, opened the show with “That Old Black Magic” and moved smoothly into “Mack the Knife,” much to the delight of the audience.  However, I would have preferred Smith to continue to sing the song alone, rather than turn it into a duet with Wicker’s nice, but somewhat nasal soprano.  I felt her voice was too thin and lacked expression for this well-known song made famous by the likes of Bobby Darin and Frank Sinatra.  The duet of “Tango Ballad” was better, though the staging with Wicker initially sitting in a chair in front of Smith while holding his hand seemed odd and uncomfortable.  The duet of “Over the Rainbow” would have worked better as a solo performance for Wicker.  Additionally, I was disappointed that the choice was made to splice the song “Neverland” into the middle of one of the most popular American ballads ever written.  “Over the Rainbow” could have been a show stopping number for Wicker and deserved to be sung alone and in its entirety.

“Something’s Coming,” one of my favorite songs, was a stand-out performance for Smith.  He gave an energetic and emotional rendition of this well-known song as his voice soared around the small Point venue.  I am not sure what happened to his infectious energy but only one song later Smith’s flat, emotionless “Cool” left me confused.  Moments later, Smith came back with an engaging version of “Down with Love.”

Wicker and Smith close the program with a nicely staged duet of “Come Rain or Come Shine.”  Here, they look at each other while singing a song which is arranged to compliment their vocals nicely.  They follow this song with the poignant “If I Only Had a Heart.”  Smith uses his deep voice to charm the audience as he gazes at Wicker while singing this fun number.  Wicker’s “I’m a Stranger Here Myself” follows and, unfortunately, seems off-key and highlights the nasal qualities of her voice.  Wicker comes back strong with Smith in a nice duet of “It Never Was You.”

Although the vocals of Smith and Wicker were inconsistent in both quality and expression, I enjoyed some of the performances.  I only wish that they were able to make a better emotional connection with the audience in this very intimate setting.  Perhaps if this show had taken place at night, when the Point was dark and moody, the experience would have been different.