Commedia dell’arte, that venerable Italian theater form populated by masked stock characters and vaudevillian slapstick, makes for an interesting departure from conventional theater-going.  The energy is quick, light, and informal.  The actors roll with punches, figurative and literal.  The audience is allowed—encouraged, really—to be a character unto itself. 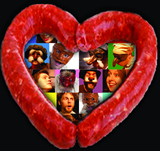 I could tell you more about it, but you’d better just let Faction of Fools show you.  It’ll be a lot more fun.

Tales of Love and Sausages is made up of seven commedia sketches, which are laid out menu-like in the program, and four of which are performed on any given night.  These, most of them variations on classic comedy scenarios, range from a mistaken-identity lovers’ scene to a grand sausage heist to an elaborate battle dream sequence.  (This last one, called Machina della Guerra, was the highlight of the opening night assortment.)

The success of a piece like this rests on absolute, unflagging commitment from the actors, and there is no doubt that this cast brings it.  Directors Matthew R. Wilson and Toby Mulford have assembled a motley squad who hurl themselves, sausage over teakettle, into the material.

The inevitable downside to this, of course, is that when the quality of the material droops, a slight aroma of flop sweat develops.  And the material can be uneven: the inescapable male-anatomy jokes, for instance, became a few too many for my taste, and sometimes a sketch will outlast its premise.  But this is the exception, not the rule.  The writing is intelligent more often than it is puerile, and even finds room for a couple of witty contemporary references.  (I won’t ruin it for you, but my favorite involved the cast seamlessly quoting a famous dance from the ‘80s.)

Ensemble work is the major strength of this production—the aforementioned war-dream scene features eight performers, and they enact some awesome feats of physical comedy—but there are some standouts.  Daniel Flint and Emma Crane Jaster pull off the heist scene with panache and clownish grace.  Steve N. Bradford and Joel Reuben Ganz are very funny in a game of boastful oneupsmanship.  Wilson himself is an excellent physical comedian, and J.W. Crump gets special props for wringing hilarity out of only three or four spoken lines.

I would also hazard that this would be an excellent production to bring children to.  The slapstick and direct-address style would be delightful to kids, and most of the aforementioned double-entendres are cleverly done, Shrek-like, in such a way that adults would pick up on them but kids wouldn’t.  There were a couple of small children at the performance I saw, and their wide-eyed and vocal reactions to the show were almost as entertaining as the show itself.

Tales of Love and Sausages, Wilson’s program note suggests, inaugurates what will be a yearly tradition of commedia shows at the Capital Fringe, performed by Faction of Fools.  This is buona fortuna, indeed.

[Note: I have worked in the past with actor/director Matthew R. Wilson, and cast members Christina Frank and Laura J. Scott.  This has not affected the objectivity of my review.]

Tales of Love and Sausages

Directed and Devised by Matthew R. Wilson and Toby Mulford
Written by The Ensemble
Produced by Faction of Fools Theater Company, Inc.
Reviewed by David Winkler