There are a number of ways a solo show can go wrong: narcissism, meandering (or lack of) narrative, simple difficulty sustaining audience interest, and so on.  That Tara T. Handron avoids these in her one-woman performance Drunk With Hope In Chicago is commendable.  That she does so in a show about alcoholism, a subject matter that is as frequently covered as it is sensitive, is a real accomplishment. 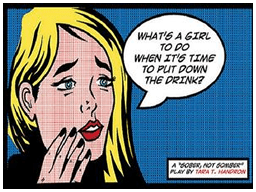 The play originated as part of Handron’s master’s thesis at Georgetown, and is, as the program note stresses, a largely fictional assemblage both of the playwright’s research and the playwright’s personal experiences.  The result is a patchwork of Anna Deavere Smith-style character monologues with an interlaced narrative that follows one woman named Hope from her first tentative Alcoholics Anonymous meeting as she moves towards sobriety.

Drunk With Hope In Chicago claims to dispense with clichéd portrayals of recovery.  This is true for the most part.  A few of the characters we are introduced to, both within and without the context of AA meetings, are ones that we expect to see—a high-powered attorney here, a hard-partying club girl there—and occasionally venture into caricature.  But even in these cases, Handron’s portraits of these women are always empathetic, and never boring.

As a performer, Handron is dynamic and damn near fearless, embodying over the course of the hour a panoply of characters, as well as abstract concepts from the alcoholic’s psychological landscape like “Fear” and “Inner Bitch”, and at one point, a chocolate martini.  (This—portraying the allure of booze from the voice of the beverage itself—was an innovative device I would have liked to see more of, but that’s just a personal preference.) On occasion these tend to obscure Hope’s main narrative rather than frame it, but their primary effect is complementary.

The performance I happened to attend was beset by some technical difficulties with recorded narrations over projections of chat room conversations.  The audience thus missed out on what I suspect was solid voice work by Handron, but it was actually just as effective to have the interludes of silence in which the audience simply had to read the conversations which, in keeping with the rest of the show, alternated in tone between humor and poignancy.

This may have worked because of the way that it enforced further variation in the pace and volume of the performance.  But I suspect more that it was because Handron and director Laura Brienza have created a piece which makes audience members feel as if they can trust the material (and its performer) to bring them gently and compassionately into a complex and difficult world.  Here’s to it.

[Note: Drunk With Hope In Chicago has only one more performance, on Thursday the 22nd at 6pm.  See it then before it goes to the Windy City itself in September.]

Drunk With Hope In Chicago

Written and performed by Tara T. Handron
Directed by Laura Brienza
Produced by What’s A Girl To Do Productions
Reviewed by David Winkler