Vampires plus hospital soap opera equals the potential for many varieties of comedic mayhem, including bloody sight gags, sordid love triangles, devious plotting, and “acting” hammier than a Christmas dinner.  (Yeesh.  Sorry.) All of these, for better or for worse, are showcased in Nights at St. Januarius. 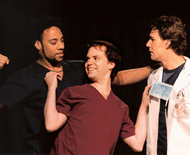 An inspired “opening credits” sequence, complete with the ‘80s synth-pop score, lets us know from the outset the sort of world we’ve just stepped into.  A few lines of economic dialogue then establish for us who exactly we’ll be watching, all variations on stock characters familiar to anyone with a television: the wide-eyed ingénue Angela (Amy Kellett), the sultry temptress Carmilla (Eleanor Keyser), the brooding malcontent Dr. Reynolds (a commanding Ricardo Frederick Evans), the mysterious and dreamy Dr. North (Sun King Davis), and so forth.  From there, it’s sweeping crosses, icy glares, melodramatic musical flourishes, and emotional knuckle-biting galore.

Then, more crosses, glares, flourishes, and biting.  Vampires are introduced into the mix, and we have neck- and knuckle-biting.  And on to the denouement.

It is broad comedy, and it is funny.  But when the piece relies solely on spoofing overblown soap acting and dialogue for its humor, as it does for, say, two-thirds of the play, it begins to get tiresome.  The rule applies to the actors as well: Davis, who cuts a strong presence on stage, doesn’t choose to go much further than stalking about and figurative mustache-twirling, and the charm of this wears off.  (He does get one of the biggest laughs towards the end with a brilliant sight gag, though, to be fair.)

On the other hand, when the jokes are intelligent and the comedy isn’t wrung entirely from ironically hackneyed soapiness, it is very, very funny.  Cyle Durkee, as flamboyant male nurse Luke, is the primary deliverer of this variety, and he steals the show with his dry flippancy and asides nearly every time he’s on stage.  A dramatic irony-laden scene between Luke and the older Dr. Doyle (Matt Dougherty, who does some great subtle comic work in his own right) is a high point of the show.  And Kellett is quite compelling as the fresh-scrubbed innocent, speaking with a too-perfect acting-class diction which serves the play’s ridiculous tone nicely.

Catherine Tripp’s direction of the piece is deft and detailed, and we know that we’re in capable hands, even as we realize a lot of it is on one note.  Inventive staging—as with a split scene that follows two simultaneous dates, or the above-mentioned opening sequence—definitely keeps the pace and energy, as well as the audience interest, up.

In the end, there’s little if any substance to it, but that would be beside the point.  Nights at St. Januarius is big, bold, and bloody, and all told, quite a bit of fun.  I can think of far worse things for a Fringe show to be.