I’ve been trying to decide what to name it. Help me out, sweetie, what do you think? I’m considering something classic, like “Portrait of the Artist as a Bewildered Mother-To-Be.” Or, “How I Learned To Stop Worrying and Love the Embryo.” As it stands, the name “Running:AMOK” implies a sort of chaos and intensity that doesn’t ever surface in this calm, confident musical performance piece. Sure, girls may be facing the biggest change possible – a whole new life force, growing deep inside – but what they go looking for here is something therapeutic. Forget the idea of running amok; what runs throughout is a sense of poetry, poise, and that special confidence born of camaraderie. 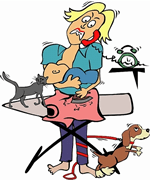 The show opens with a handful of introductory vignettes. We meet LeShell (Quineice), a successful club performer who argues into a cellphone with a friend who doubts her ability to hold up her career with a child in tow. Next is Nina (Teisha Marie), a successful designer of wedding gowns whose nausea interrupts her pitch during an important meeting. Then Camille (Sudani Scott), a successful novelist, questions whether she can be satisfied with the fact that her pregnancy is due to a short-term fling with a man now missing. Luckily for the final act, they’ve come together in a waiting room and are met by the mysterious and headstrong Mama Belle (Dionne), a successful singer who becomes a giver of wisdom (and wisecracks) to this troubled trio of new mothers.

You may have noticed the common adjective above.  The main characters, without exception, are successful modern women, strong and accomplished. And more power to them! It does mean, though, that the story’s slack. The sole plot point, if it’s even that, are the pregnancies themselves, and the ways in which our heroines study their issues and questions don’t ever rise above a laid-back, chatty tone. The focus is not, as with much theatre, on the exceptional circumstance. In fact it’s quite the opposite: a group acknowledgement of the universality of motherhood. And not only that, but a call to contemplate and support.

The lessons are nothing revolutionary. It’s not any worse being a mother, it’s just different. Your life and your art are one and the same, so harness your creativity and find strength in yourself! Your biggest gift is right before your eyes!

As you might imagine, nothing goes unsaid, and there ain’t a lick of subtext anywhere. But really, the script exists solely to thread together the songs, which it does with more than adequate grace. And the songs, composed by Gary Young and played prerecorded with a drum kit and keyboard, are slow-burning little gems: some smoky, some bluesy, some sparkly. In another venue it might have sounded tinny, but it’s a great fit for the Goethe Gallery. And even though a couple of the singers need to up their volume, everyone sings with purity and precision. In the songs, we truly find the soul of the show. “Here in me lies life!” sings Quineice with her hands on her belly. Amen to that.