With a charming smile, Marc Spiegel captivates his audience with rhyming couplets and animated voices. The Grubrag’s Ballad is an epic poem, but it doesn’t read anything like Beowulf. Instead, Spiegel enchants his audience with tales of mythical creatures, carrying a musical-like rhythm throughout the piece. 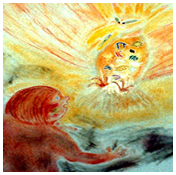 Not knowing what the epic poem, The Grubrag’s Ballad, would entail, I was pleasantly surprised upon entering the Point. A jovial and inviting actor, with a shock of gray hair, walked about the stage, preparing for the hour-long recitation of a collection of couplets. Marc Speigel, the author and performer of The Grubrag’s Ballad, has the look of Albert Einstein, and the mind of Dr. Seuss.  He starts by assigning sound effects to sections of the crowd, pointing to them when it’s their turn to shout.  Then like a conductor of a symphony, he starts his story and points to various sections at the appropriate times, turning the audience into a band to accompany his couplets.

The story itself follows the Grubrag through a mythical land, while he winds his way through interactions with various creatures. The Grubrag, unlike the creatures around him, doesn’t know what it is he is good for, and spends a majority of the story trying to figure out what he should do. Every creature seems to have a purpose, yet the Grubrag does not.

Spiegel states in his program, “some say [The Ballad] is a children’s story. That’s fine with me. I’m sure you will come to your own conclusion.” The Grubrag’s Ballad is playful in nature, and does strike me more as children’s entertainment, but it is engaging for any age. Not entirely finished, The Ballad will certainly continue to grow,and in the mean time, hopefully Spiegel will continue to share it with audiences.

Written and performed by Marc Spiegel
Reviewed by Caitlin DeMerlis