I had seen both of Hillary Kacser’s one-woman plays in previous Fringes. I immoderately enjoyed Rose, which was a portrait of a single character in Doris Lessing’s justly famous book “In Search of the English” in 2006. On the other hand, DISORDEr, which I saw last year, struck me as a DISASTEr. I went this year in the hope that I would find Rose in even fuller bloom, and DISORDEr in better array. I am pleased to report satisfaction on both scores. 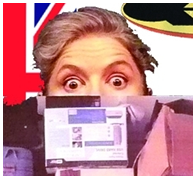 Rose Jennings is a London shopgirl who lives in the same rooming house as Lessing during the time immediately following the second War. Kacser, who adapted the script from Lessing’s book, puts on the character of Rose, talking to Lessing (who is played by the audience). She is in the throes of a singularly unpromising romance with a local tobacconist, and they have separated because Rose has hinted too strongly at the desirability of marriage. Rose spends much of her time regaling Lessing with stories about her efforts to win her beloved back by making him jealous. She devotes the whole of her consciousness to this struggle, which ranges from buying her cigarettes from a kiosk instead of from him to making out with a policeman. As she struggles to land her fish, we realize that she will be married, if at all, briefly and unhappily; and the cheerier Rose becomes, the more doomed the relationship seems. At the end she gives us a surprise, though it might not have been a surprise in Rose’s day.

Kacser has polished what was already a spot-on character study. The story is more personal and less political than I remember it being four years ago, although Rose’s piquant observation that we all seemed to care more for each other during the war than we do once free from its clutches is still intact. At the end, we are invited to sing “Lily Marlene” (Hans Leip and Norbert Schultze), surely one of the world’s most singable songs (in the earlier version, Rose sang it). Rose is a marvelous piece – a sharply, subtly observed character study placed in a very specific point in time. It is not for everyone, but if you like this sort of thing you will like Rose very much indeed.

DISORDEr is the story of a hoarder – Packrat Patty (Kacser), an otherwise intelligent and articulate woman who is simply unable to throw out any of her stuff. She cannot throw out an old Beanie Baby; she throws a flyer into the trash and then, panicking, takes it out; when a book on hoarding comes in the mail, she saves the box. This is not merely some goofy behavior pattern. Because Patty is so poorly organized, she often stuffs valuable papers, including checks, in piles of trash – thus making it impossible to discard the trash without sifting through it. Her behavior becomes a serious impediment to her design to have her lover move in with her. He cannot imagine living among all the stored materials – all the junk – much less raising a family there.

So she seeks to remedy her condition, using everything in the modern bag of tricks: self-help groups; psychiatric consultation; professional organizers; and finally, reality shows focused on obsessive hoarders. Patty cannot finance the psychiatric helps she believes she needs (hoarding is not yet considered a mental illness, and thus not covered by insurance) and the reality shows reject her because she is not disorderly enough.  She soldiers on nonetheless.

This is an ambitious show – in addition to playing many characters (I counted 14), Kacser juggles (adequately), sings (well), plays the guitar (not so well – she had to tune it first) and plays the accordion (who can tell?). Not all of this works perfectly – the characters at the self-help group, for example, tend to repeat themselves – but even if it did, it would distract from, rather than enhance, the story line.

These shortcomings notwithstanding, the show motors to a conclusion which avoids a saccharine happy ending while leaving Patty with hope, and the possibility of joy.

Two Reprises is an object lesson in the benefits of relentless editing and reworking: one show getting better, and the other becoming superb.

Running time:  100 minutes, with one intermission

Did you see the show? What did you think?