The Board of Directors of an international dog-food company once held a meeting, with legendary results. They had just released a new product which represented the cutting edge in canine nutrition. It came, moreover, with the endorsement of leading celebrities, and it was the beneficiary of a smart, well-financed advertising campaign. 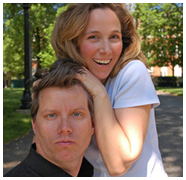 Even the design of the can label had been tested in front of focus groups. And yet the product was selling miserably. After calling in consultants and spending millions more on research, they came up with an answer:

So it is with The MacCloskey and Myers Complete Do-It-Yourself Comedy Hour (henceforth “M&M”), a series of attempted comedy sketches now playing at the Goethe Institute. It is directed by the great Gary Austin, the improv genius who founded The Groundlings. It features digital shorts by Emmy-winning Tyler Brunch; voice-overs by Emmy-winner Melissa Leebaert, a nicely composed set, attractive performers in Luke MacCloskey (who, notwithstanding, is a bit of a fumblemouth) and Christina Myers. Even the program is nice, with a color picture of the performers, posed adorably.  There’s just one problem.

No, this understates it. It is to funny as the Sahara Desert is to shrubbery.  Of the nineteen sketches in this one-hour show, only one – about a man trying to call a suicide hot-line and getting voice-mail hell – is actually amusing. Another sketch, about an insomnia tape, has some laughs. The rest – well, half of them have no punch line. In the other half, you will guess the punch line thirty seconds into the setup. At least one – involving a man who gives a woman a forcible foot massage – is seriously creepy.

Toward the end, the performers call two audience volunteers down to go through some pointless exercise with a film being projected on the Goethe screen; they are funny. The show concludes with an improv exercise which will be familiar to any fan of the brilliant improv show, Who’s Line Is It Anyway? That was funny. M&M, regrettably, is not.

This marks the 132nd, and final, review of the 2010 Capital Fringe Festival.

Did you see the show? What did you think?