The grandson of Oscar Hammerstein II (and, thus, the great-great grandson of the first Oscar Hammerstein, the impresario who all but established Times Square) pulls his theatrical family’s story together in one perceptive, fascinating volume. Filled with colorful details, the book is both a delightfully entertaining read and a source of solid information on the careers and personalities of the two Oscars and of Willie and Arthur who also made contributions to the history of the American theatre.

From the first Oscar’s battle to make opera a popular entertainment instead of a showcase for the elite, to his grandson’s battle to remake the American Musical into a genre for serious theatre, the book sheds light on just how Broadway, as we know it, came to happen, both on stage and off.

The volume is not simply copiously illustrated, the illustrations are intelligently placed throughout the narrative. No collection of photo pages in the middle of the text here and this author doesn’t restrict himself to illustrations just from the theatrical side of the story. Instead, when he’s writing about Oscar I’s early successes inventing devices for the cigar trade there are sketches from his patents and photos of him working as an inventor. When the topic is Oscar II’s second marriage being the result of a shipboard romance, there’s Oscar II and Dorothy Blanchard on an ocean liner deck.

The illustrations from the theatrical side are also well chosen and properly placed including exterior shots of most of the important theatres in the story, and occasional seating charts and programs.

Taking Oscar I from a penniless arrival in the new world in 1864 through the making of multiple fortunes which financed his fascination for grand opera and their loss in a series of spectacular reversals, the book details his doings as a theatre builder and as the impresario that filled those houses with hits and flops. In the process, he moved the theatre district uptown to what was then Longacre Square, soon to be renamed Times Square, with a central station on the new subway system that made his playhouses reasonable destinations for the entire population of the nation’s largest city.

While some of the story of the lives of Oscars I and II will be familiar to many theater lovers, the book will come as a revelation to others when the author turns his attention to the generation between them who, in a lovely phrase, he says “learned all they knew from Oscar I and taught all they knew to Oscar II.” Oscar I’s sons Arthur and Willy, the father of Oscar II, both had theatrical careers of note.

Willy managed the Victoria Theatre on 42nd Street for his father and made contributions of his own. He’s credited by Will Rogers for getting him to talk to the audience during his famous rope twirling act. He was the antithesis of his flamboyant man-about-town father. The author describes Willy as a “home-by-nine kind of guy who never saw the second act of his own evening show as he simply would not let it interfere with his family life” and the book includes the one and only photo of Willy that has come down to us.

Arthur, on the other hand, was much more visible in the theater world of the turn of the century. He took over his father’s opera business to save it in the wake of yet another trough in the cyclical timeline of the great Oscar I. He became a notable producer in his own right. From the perspective of the family’s theatrical history, he probably made his greatest contribution when, as the acting head of the family after Oscar I’s death, Oscar II appealed to him for permission to enter a theatrical career despite a pledge he had given his late father to pursue law instead. Arthur not only gave Oscar II his consent he gave him his first job in the theatre … assistant stage manager for a Rudolf Friml, Otto Harbach musical You’re In Love which had a then-profitable run of 167 performances in 1917.

The book includes such interesting ephemera as the first lines of Oscar II to be heard from a Broadway stage (“Make yourself at home / Neath our spacious dome / Do just as you please / In twos or threes if you’d rather / But rest assured you’ll be no bother”) in the musical “Furs and Frills” which had a less-than-profitable run of 32 performances when You’re In Love closed at Hammerstein’s Casino Theatre at Broadway and West 39th. 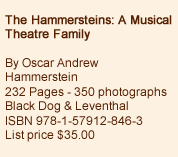 Once the book gets to about the time of Oklahoma!, it enters territory that is quite familiar to most everyone who would be interested in the book in the first place. However, the author’s pedigree gives it a perspective that is interesting and he peppers the pot with interesting stories. He even includes an entire chapter on the role of Oscar II as the mentor of Stephen Sondheim. There are some lovely photographs of the Hammerstein farm outside of Doylestown, Pennsylvania where Sondheim became a virtual member of the family in his youth.

That farm, by the way, is now a Bed and Breakfast where you can actually spend a night filled with the spirit of Oscar II – It is called the Highland Farm Bed & Breakfast and can be reached at (215) 345-6767. A perfect getaway would be to buy this book and take it to the Highland Farm to read in Oscar II’s own home.