Not every Stephen Sondheim musical was written for the stage. One was written for television. Now, at long last, a kinescope has surfaced, showing the entire original one-hour program with four songs by Sondheim and it is available in a nearly pristine conversion to digital on DVD with a few extras as well.

The teleplay for the 1966 musical was by James Goldman who was then working with Sondheim on what became Follies some six years later. His script was based on a story by John Collier about a poet who hides out in a department store so he can be alone at night to write without interruption. Unknown to him, however, the store is already occupied by others who hide as mannequins during the day but live their own lives at night. They are led by an imperious grande dame, but there’s also one pretty young girl who got locked in for a night accidentally and was kept there against her will by the long term residents who don’t want the world to know of their nocturnal world. Which do you think the poet falls in love with?

As a television play it is more than slightly reminiscent of Rod Serling’s “The Twilight Zone,” but with four songs. There’s “If You Can Find Me, I’m Here” in which the young poet bursts into song out of pure joy when he succeeds in getting locked in for the night. Then there’s “I Remember” by the young woman who has been a prisoner inside for so long such things as sky, clouds, snow and leaves fade from memory. There are duets for the two of them: “When?” as they get to know each other and “Take Me To The World” as they decide to leave the department store.

Anthony Perkins is the young poet. Can the star of Alfred Hitchcock’s “Psycho” sing? Yes — quite well, actually. This wasn’t a case of “Norman Bates Sings!” He’d had three fairly well selling albums as a popular singer, scored one moderate hit (“Moonlight Swim”) and he’d only recently spent a few months on Broadway staring in Greenwillow, a musical by Frank Loesser. What’s even more interesting to those with Theatre Shelves for show music, he was a vocalist for the quirky Ben Bagley, singing on four of his “Revisited” albums – Rodgers & Hart Vol. 3 and 4, George Gershwin and Contemporary Broadway.

The love interest was Charmian Carr of whom much was expected at the time. She’d just been Julie Andrews’ daughter Leisl in the monster-hit movie “The Sound of Music.” She fell in love in real life, however and married and retired to raise two children. She explains some of the story of her subsequent life in an interview included on the DVD, an interview conducted by Jane Klain, the “resident sleuth” of the Paley Center for Media in New York.

Also on the disc is a lengthy interview with the director of the show, Paul Bogart, and a twenty minute collection of silent but color footage of Anthony Perkins inside Macy’s department store and on the street outside, with the general public visible in the background. It is fascinating to see how the people dressed and behaved as well as a sampling of the merchandise on display in 1966. The show had been produced in color but the kinescope that comes down to us and which is the basis of this release is in black and white.

There’s more music than just the four songs. There’s an intriguing waltz-tempo’d dual clarinet piece to back up a party scene and music for a chase scene as the couple tries to escape the senior occupants. The chase music was scored by the production’s assistant conductor, a young man named David Shire who went on to compose major works of his own, such as Baby and Big on Broadway. The music was arranged and conducted by Norman Paris. 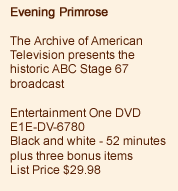 The one hour show (actually, 52 minutes, leaving time for commercials) was just one of five original musicals written specifically for ABC’s ambitious but short lived series of culturally significant original works under the title Stage 67. Most of the shows were straight plays but the series also included musicals by such major creators as Richard Adler, Bock and Harnick, Bacharach and David, and Comden and Green with Julie Styne. If only we had kinescopes of them!

The songs for “Evening Primrose” have not gone unrecorded just because no one could come up with a clean copy of the video. No, you have your choice if you just want to get the four songs. Mandy Patinkin got Bernadette Peters to join him on his CD Dress Casual (ASIN: B00000271P) where they treat it as a single work, sort of an “Evening Primrose Suite” without the incidental music. Bruce Kimmel produced an album for Varese Sarabande records titled “Sondheim at the Movies” (ASIN: B000001512) using Gary Beach and Liz Callaway on these songs while Nonesuch included a recording of the four songs on the album “The Frogs / Evening Primrose” (ASIN: B00005OM6W) with Neil Patrick Harris and Theresa McCarthy.