Need a last minute gift for a theatre lover? Here’s my recommendation: A new book covering the history of the Broadway musical theatre from its antecedents to the start of this century that is well written, its observations are thoroughly thought through and it happens to be on hand in many local book stores as well as online.

Fordham University’s Larry Stempel has assembled a highly readable and continuously interesting history of my favorite subject, arranging the information into themes and then arranging the themes chronologically. Thus, you don’t always encounter one show after all the earlier ones have been discussed. Instead you learn about the sources of this unique genre, track the evolution of the form through an examination of operetta, revue, jazz-age book shows, integrated book shows, etc. You take a look at what became known as “The Golden Age” and then assess where the art form has gone and where it may be heading.

You could get the equivalent of a collegiate survey course on the American musical from just reading the three to six page introductions to each of the 16 chapters, and skipping the subsequent meat of each chapter. For example, pages 517 to 522 offer one of the most comprehensive, comprehendible and cogent explanations of the phenomenon of the “concept musical” I’ve seen. I suspect, however, that most readers will not be tempted to skip any of the meat. Indeed, most may only complain that they would like even more detail in a few sections such as the treatment of the impact of Gilbert and Sullivan’s bigger hits on the American stage or the coverage of up-tempo shows of the twenties.

Stemple takes a historian’s view of his topic, linking developments in the evolution of the Broadway musical to the wider world, or at least to the development of the greater American society. For example, he draws the connection between the opening of the Transcontinental Railroad in 1869 and the expansion of the theatrical touring industry. Later, his brief description of the emerging youth culture puts the success of Hair in perspective.

Time and again, Stemple devotes the space needed to cover his topic thoroughly. He devotes ten pages to Show Boat alone. But, then, can any book that devotes less than ten pages to Show Boat be comprehensive in its treatment of the history of the Broadway musical? No. Ten out of 685 pages is about what is necessary. Add to that 140 pages of indexes, notes and sources.

The book is filled with tidbits which I’ll wager most readers are learning for the first time:

•  Uncle Tom’s Cabin was the most popular American play of the nineteenth century.

•  The word “melodrama” came from melding the words “melody” and “drama” for “a play with music — but without singing”.

•  Regarding minstrel shows, Frederick Douglass railed against its blackface imitators as ‘the filthy scum of white society, who have stolen from us a complexion denied to them by nature.”

•  George M. Cohan may have had great success with book shows, but his view of plot was “the masses don’t want it … it’s like coating bitter medicine with sugar, this business of feeding plot to an audience.”

•  The blackout laugh in the 1930 musical comedy Flying High may have been “‘the biggest single laugh in the history of the American Stage’ – clocked on opening night as lasting sixty-two seconds.”

•  Irving Berlin may have been said by Jerome Kern not to have a place in American music because “he is American music,” but his own view was “We were all pretty good songwriters, but Gershwin was something else. He was a composer.”

•  It was George Gershwin’s father who, when George said that he wanted to “write an absolutely new type of musical show, with modernistic words as well as modernistic tunes. But where can I find a librettist?” replied “Try Ira.”

•  Irving Berlin’s “They Like Ike” in Call Me Madam provided the campaign song for Dwight Eisenhower’s run for the Presidency in 1952 (not the other way around.)

•  The term “The Golden Age” of the Broadway musical may have been adopted after Brooks Atkinson wrote of “a golden period between 1940 (Pal Joey) and 1957 (West Side Story.)” 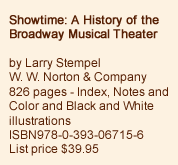 s is by no means a coffee table picture book, the volume does have two eight-page sections of color photos plus almost 100 black-and-white illustrations sprinkled throughout that are a real pleasure. It is obvious that a great deal of attention was paid to their selection, for they really do help tell the story.

Some books you read to learn what you don’t already know. Others you read to augment what you do know and to help you organize it into a logical construct. This book can serve either function. If you – or the theatre lover for whom you are buying it – already have a feel for the Broadway of recent years, including the revivals which provide a link to the past, the book will fill in many blanks and put it all in perspective.

Anyone who has just discovered the pleasures of the musical stage, on the other hand, can come up to speed rapidly reading this one volume. Either way it is a pleasure.