The Atlantic Theater Company has enriched us with productions of The Lieutenant of Inishmore, and Spring Awakening, both of which moved on to acclaim on Broadway.  For these and other productions like Martin McDonagh’s The Cripple of Inishmaan, the company has been recipient of Lucille Lortel and Tony Awards, and it is among our city’s most highly prized and praised theatrical institutions. In its 23 years of operation, currently under the artistic leadership of Neil Pepe, it has mounted 125 plays, all of them with distinction.

This preamble  leads to my question: “Why The New York Idea?” The Atlantic has written that it believes “the story of a play and the intent of its playwright are at the core of the creative process. The plays in the Atlantic repertory, from both new and established playwrights, are boldly interpreted by today’s finest theatre artists and resonate with contemporary audiences.” If this is its mandate, it certainly has lived up to it. Until now.

This current boulevard comedy by Langdon Mitchell from the Broadway season of 1906 has a line in it: “Marry for whim. That’s the New York idea of marriage.” Evidently that sent society reeling in those early days of the 20th century, and the carriage trade flocked to see this shocker. It sounds  like it might have been the Virginia Woolf of its day, and it served Mrs. Mitchell, the actress  Marion Lea, as a vehicle in which she  had a great success playing Vida Philimore, the original Gay Divorcee.  It’s unfortunate that the Atlantic chose to open this revival just now, for it followed by a matter of days another comedy of its time, (well, 1895, ten years earlier) the Oscar Wilde masterpiece The Importance of Being Earnest, which puts this American cousin to shame.

The ladies are still bustling about in bustles, but this cast seems less comfortable in them than does the one at the Roundabout’s offering of the Wilde play. And though I’m certain high society spoke in a high falutin’ manner in our country’s adolescent years, this attempt cries out for lessons from the Brits who seem able to use language so beautifully to present their arguments. The play is set in Washington Square, Greenwich Village, possibly around the corner from where the Heiress was jilted by Morris Townsend in the play adapted from Henry James’ novel. What was scandalous behavior in 1906 can hardly raise our eyebrow a hundred years on, and the play seems to defy the Atlantic claim that its offerings “resonate with contemporary audiences.”

A game cast which includes some of those who appear for Atlantic with frequency, plunges in but under the usually  deft direction of Mark Brokaw, they, for the most part, don’t seem to inhabit their characters so much as show them off to us. Character actor Peter Maloney knows his way around period pieces, and his work as Sudley opens the play with just the right attitude and tone. He appears with  two characters who seem to find the word “divorce” as bitter as brine,  but once we realize Mr. Mitchell hasn’t much new to tell us, we lose interest as this light hearted fare with a serious purpose spins its way, slowly, to a happy final curtain.

The Atlantic’s warm and cozy theatre on West 15th Street is being renovated, so The New York Idea is playing at the Lucille Lortel Theatre on Christopher Street. Despite my carping, I’m grateful to the Atlantic for taking this one off the library shelf, dusting it off, giving it a David Auburn spin (Auburn, the author of Proof, has done this adaptation), and letting us have a look at what was attracting the crowds once upon a time.

For those who like this sort of retro theatre, you might send a note to the Atlantic Theatre management with requests for The Easiest Way, the Shanghai Gesture or Why Marry? for the seasons ahead. For the rest of you, I say “let sleeping dogs lie.” 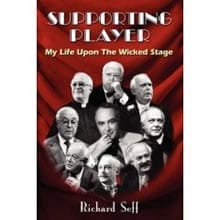 Performer, agent, writer: among his many accomplishments, Richard Seff has written the book for Shine! The Horatio Alger Musical!, which debuted at the 2010 New York Musical Theatre Festival.

He is also author of Supporting Player: My Life Upon the Wicked Stage celebrating his lifetime on stage and behind the scenes, available through online booksellers, including Amazon.com.

Richard Seff, a true Broadway quadruple-threat - actor, agent, author and librettist- has written the well-received Broadway autobiography, "SUPPORTING PLAYER: My Life Upon the Wicked Stage". Each year, Actors Equity recognizes the year's most outstanding supporting player with, appropriately enough, the Richard Seff Award. He is a member of the Outer Critics Circle.