A wise woman once told me that the Fringe Festival is all about taking risks and having fun. This applies to everyone from the performers, writers, directors, and even the audience members.

Well, cast and crew of I Like Nuts! (The Musical): mission accomplished. 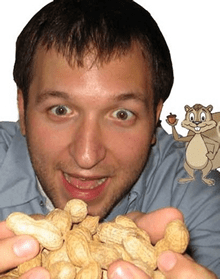 This wacky musical centers around Horatio Hornbeam (Nick Greek) who is obsessed with all things nuts. After being rejected from a job at a nut factory, Horatio is visited by the Nut Guru (Christopher Michael Todd) who advises him to go on an adventure. He promises that after the adventure is complete, he’ll teach Horatio everything and anything he needs to know about nuts when he meets him in Norway.

Along the way, Horatio and his new pal Gary Goober (Rick Westerkamp) pick up a few friends, including a Robot (Vanessa Kinzey), a Pirate (Timothy R. King),  and a Vampire (Josh Drumwright). All of whom end up trying to help Rob The Angry Squirrel (Harv Lester) find his nut tree so he and his wife can live dysfunctionally ever after.

If you’ve never seen a Fringe show before, you might want to see something else to ease into the wacky factor of this play. (You’ll know what I mean when you see Breastica Boobington). However, if you want something fast and Fringe – get your ticket now.

The music, while not incredibly complex, is pretty catchy, and Josh Speerstra does a solid job as the acoustic guitar accompaniment. It seemed that Greek played the lead character of Horatio Hornbeam like he was slightly retarded and/or on a psychedelic drug the whole time, but I assume this was on purpose and it made for some pretty good laughs.

Other highlights included Josh Drumwright as the not-so-bloodthirsty vampire, and Christopher Michael Todd as the Nut Guru and depressing open mic MC.

As you may have guessed from the title, you can expect this show to be about all things nuts, in every way you can imagine. That is, it contains information about nuts the food, the characters were a little (OK, a lot) nuts, and the expected innuendos about “nuts”, the nickname for testicles, were aplenty (as is evident by the chorus of the opening song “I like nuts, I like nuts in my mouth”). If that’s not enough to get your nuts into a seat at the theatre, the audience members also get a bag of peanuts at the end of the show courtesy of the Virginia Peanut Growers Association.

Overall, the story flowed well, the cast always sang on key, and while there weren’t any side splitting moments, it made me and the rest of the audience laugh. Just make sure you embrace the absurdity, and  let your inner Fringe flag fly. Don’t expect brilliant theatre, but do expect Fringe.

I Like Nuts! has 4 more performances at Studio Theatre.
Details