In the quest for the perfect comedy, many jokes must be tried. Earning laughs can seem like a battle, and ingenuity is a must to stand out from the field. And that kind of creative energy is what Love Me! Why everyone hates actors is so funny. Though perhaps not the most polished performance piece, it’s certainly original and will definitely make you laugh. 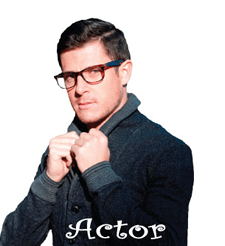 Don’t be scared off by the theatre-centric title. In truth, this hour-long comedy isn’t too much about acting at all. More accurately, it follows the life of one man, Cyle, as he finds his way in the world, eventually leading to his fabulous career as a DC actor. Told by the suave narrator (Alex Vaughan), the other performers constantly switch characters and locations, portraying everything from coke-addled strippers to a church congregation.

The storyline is zany, going in every which direction. Scenes are short, and the best ones are hysterical. But the overall goal of Love Me! is unclear, and the murky ending is ambiguous. At times, the chaotic switches of people and place become hard to follow.

The actors, though, trooped through all of these rigorous changes with ease. Their onstage zest is what makes for each comic moment, and their loud, presentational style of acting was just what the show called for. Vaughan, for example, knew his place as the omniscient narrator, whether staring directly at audience members or commenting casually at the events onstage.

Other memorable performances included that of Adam Adkins, who played the actor’s father, a sapient Episcopal priest. Adkins had the religious motions down, yet didn’t shy away from bawdiness when it was called for. Similarly, Ethan Slater pushed the envelope as Cyle, hilarious whether preparing for his Book of Mormon-inspired League of Washington auditions or bartending at the hottest gay nightclub.

That was the best thing about these actors: their willingness to be flexible, fearlessly going from one character to the next without a moment of hesitation. This was evident, too,  in Cyle Durkee’s direction, whose talent could be seen in the various settings made from folding chairs, or a massive comedic dance number.

But though Durkee and the cast were committed to their bold choices, not all succeeded. Some sketches were unmemorable, some accents (like Renana Fox’s young Brit) silly or indistinguishable. The aforementioned ending was a wash.

But something has to be said for pure originality. Love Me! Why everyone hates actors is not a flawless show, but it is new, exciting and different from the other shows at Fringe. These actors may not have won the quest for the perfect comedy, but they have certainly earned a place as contenders. They just have a little farther to go.

Out of a possible top rating of 5, Julia rates this a 3.
Click here for more Fringe reviews

Julia Katz is a director, producer, and critic. Most recently, she directed Refresh: Stories of Love, Sex, and the Internet at the Edinburgh Fringe Festival and 59E59 Theaters, which was called "an inventive, thoughtful examination of the modern cyber morals that affect us all" by The Stage. She is the artistic director of Critical Point Theatre, an ensemble dedicated to collective generation and innovative storytelling. As a critic, she has written for The Washington Post, DC Theatre Scene, Fringe Review, and more. Julia currently lives in Manhattan with her partner and two devilish cats, where she makes her living writing freelance and teaching theatre and dance.